"And the Dish Ran Away With the Spoon": Mythical Foodscapes in Children's Literature Part IV: Raggedy Ann in Cookie Land 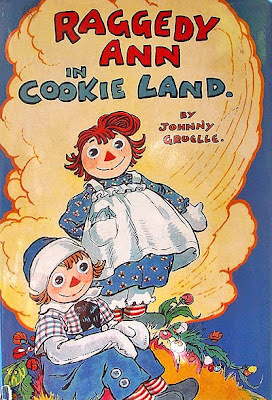 In Part III, Raggedy Ann and the Magic Wishing Pebble, many adventures followed when Raggedy Ann found a magic wishing pebble and wished for a magic ice cream soda fountain and a lollipop field. The story takes place in the countryside, a make-believe tale in the setting of the physical real world. In Raggedy Ann in Cookie Land (1931), however, the Raggedys enter a fantasy world composed entirely of cookie dough. Indeed, the setting is strikingly similar to Bunbury, the dough-based village that Dorothy stumbles upon in the Wizard of Oz (1910) discussed in Part II.

Raggedy Ann in Cookie Land begins with a nod to Alice in Wonderland, when Raggedy Ann and Andy fall down a hole in an oak tree while in pursuit of a rabbit. They land in an ice grotto and quickly discover that all of the icicles are made of flavored soda water. As in Alice in Wonderland, when the Raggedys leave the real world (i.e., the nursery to which they belong) their first encounter is with something to consume. It is through this first taste of magic that the adventure begins, for the Raggedys find that the icicle water has gone right through their cotton stuffing, causing them to stick to the grotto's ice floor. As a result, they are at the mercy of Hookie the Goblin, who informs them that he will chop them with an ice pick and make noodle soup out of Raggedy Ann.

After the Raggedys' inevitable escape with the help of a kindly elf named Little Weakie, they enter a door which leads to a giant oven room, filled with the tantalizing smells of a bakery. Despite the group's innocent intentions, they are countered by a strange, stiff man who is very angry at the trespassers and says he will have to put them through a roller. In defense, Little Weakie strikes the man and he breaks in half. It is then that the Raggedys and Little Weakie discover that the man is a cookie man. Feeling very sorry that the man is broken, Raggedy Ann mends him with molasses and decorates him with some candy icing trim so that he looks much smarter. As the cookie man regains consciousness, he is so relieved to have been mended by the kindly group that he takes them home to meet his family-- Mrs. Cookie and their two children. It turns out that the Cookie family is deeply fearful that they or their possessions (all made of cookie dough or candy) will be eaten by interlopers, and are thus relieved when they do meet anyone who does not intend to eat them. It is surprising and unnecessary that anyone should want to eat the cookie people themselves because they are always baking more and more cookies and giving them away. And yet, there are numerous foes, such as Hookie the Goblin, who do attempt to eat the cookie people.


After arriving at Mr. and Mrs. Cookie's cake house, the Raggedys and Little Weakie sit down to dinner: 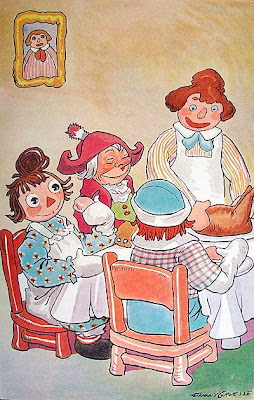 "It was a lovely dinner, for Mrs. Cookie had baked a chicken, nice and brown. It wasn't a real-for-sure chicken. It was a cake chicken covered with maple-walnut and chocolate icing to make it look real. And, it was stuffed with chopped cherries and pecan nuts. The gravy for the chicken was chocolate ice cream, just soft enough to pour over it. The Raggedys and Little Weakie enjoyed the dinner very, very much for it had been almost an hour since they had eaten anything. And then they had had only eleven cookies apiece, and those did not have icing on them. So they were quite hungry."


The abundance of food in Cookie Land attracts some very hungry lost souls, some who do not even know they are hungry until they have tasted some of Mrs. Cookie's baked goods. The Snitznoodle, for instance, soon becomes friends with the group. He is clearly not a threat for he says,

"But you know, I never eat anything but wind sandwiches."

"I am very fond of them," the Snitznoodle said. "And, as they cost nothing, it keeps my board-bill down to a small amount each month."

The Snitznoodle then demonstrates how to prepare wind sandwiches:

"I'm going to show you how to make wind sandwiches. Then if Raggedy Ann and Raggedy Andy and Little Weakie ever get hungry they can find supplies almost anywhere."

The Snitznoodle took a knife from his pocket. "See?" he said. "First I cut two thin slices of air. And then I spread a lump of soft wind on each slice of air and place them together and I have a nice wind sandwich."

But when Mrs. Cookie gives the Snitznoodle an ice cream cone he admits,

"My! That is ever so much better than a wind sandwich!"

Having tasted the delicious ice cream cone, the Snitznoodle asks if he can live with the cookie people, who are very happy to welcome him to their home.


In this way, the realities of hunger are very much a part of the story. Written in the early years of the Great Depression in the United States, when many had difficulty affording even basic provisions, the vision of Cookie Land presented children with a make-believe world of plenty where everyone learns to share and so might never be hungry.  Such stories of imaginary food are not unusual in times of strife.

When food is unavailable, it is the food of the mind that can offer a measure of sustenance. As one reader noted in Part III, this brings to mind examples such as the recording of recipes in World War II concentration camps.  This has been preserved in In Memory's Kitchen: A Legacy from the Women of Terezín by Cara De Silva (2006) which collects the recipes transcribed by Jewish women in the Terezín concentration camp in Czechoslovakia.

"And the Dish Ran Away With the Spoon": Mythical Foodscapes in Children's Literature
Part I: Utensia
Part II: Bunbury
Part III: Raggedy Ann and the Magic Wishing Pebble

Posted by the five o'clock teaspoon :: fiveoclockteaspoon.com at September 24, 2012

What a lovely, sensitive and perceptive description of
these stories! You have captured the compassion of
Johnny Gruelle and raised my understanding of such
narratives to a higher level.