Kiku: The Art of the Japanese Chrysanthemum at NYBG 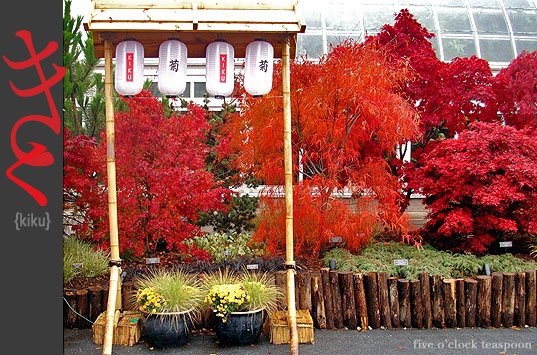 For a short time through November 16th, the New York Botanical Garden (NYBG) is displaying Kiku: The Art of the Japanese Chrysanthemum. It is the second year that the Garden has exhibited this extraordinary collection, a culmination of several years training with Japanese kiku masters in the style of kiku shown at the Shinjuku Gyoen Garden in Tokyo. The process of training each plant into its desired formation requires as much as a year of shaping through pinching and staking. Four kiku styles are on display, each one more beautiful and fantastic than the next. 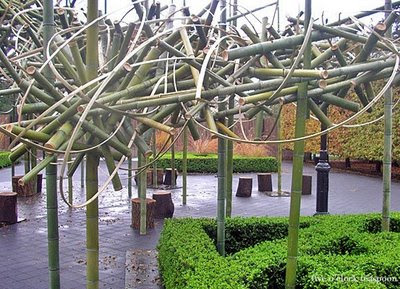 A bamboo sculpture by ikebana master Tetsunori Kawana, commissioned for the exhibit.


As with all aspects of Japanese garden design, chrysanthemum cultivation is an art, requiring years of study and practice to master. The form, structure, and shape of each petal and each leaf is evaluated and balanced with the plant as a whole and the overall floral arrangement. The bombastic yet refined kiku blossom below is part of the Ozukuri, or "Thousand Bloom" style. 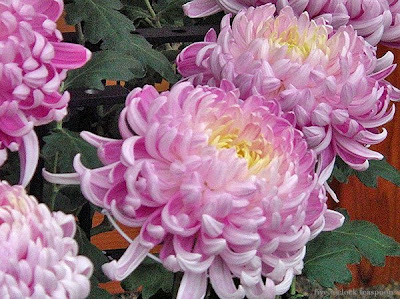 While the ordered profusion of blossoms appears to be an arrangement of many individual plants, the exquisite Ozukuri configuration is actually coaxed and developed from a single stem. Ozukuri are grown in traditional Japanese wood planters known as sekidai. To create the illusion, the plant is limited to five hardy branches. The shoots from these limbs are then trained to grow straight and blossoms are removed until only the strongest one remains on each secondary stem. The plant's nutrients are thus concentrated in one blossom, creating a quietly dramatic spectacle when all of the flowers are in bloom. 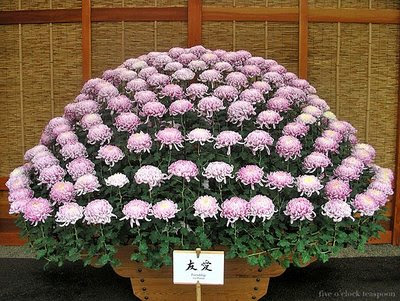 Another style on display is known as Kengai, or "Cascade." Again, the prolific display of each variety is achieved from a single stem. Hundreds of flowers are trained onto a wire frame which is bent into the display position once the flowers are about to bloom (about 10 months). In its final stage, Kengai recalls an exuberant image of wild flowers on a cliff's surface, thereby mimicking and perhaps surpassing the beauty of the natural world.

Using the exhibition style of the Japanese imperial flower show, the kiku are arranged in temporary bamboo structures known as uwaya. One thus views each style in it's own housing, a display aesthetic that not only protects the flowers from wind and rain, but also encourages the viewer to appreciate each plant as a living and therefore ephemeral work of art. Kiku are not simply natural wonders; their form is the result of careful human manipulation. Yet, rather than imposing an order onto nature, one persuades the plant's natural character into a vision of perfection. 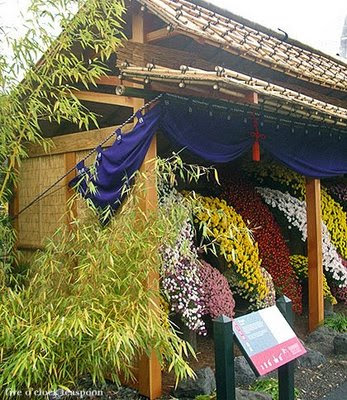 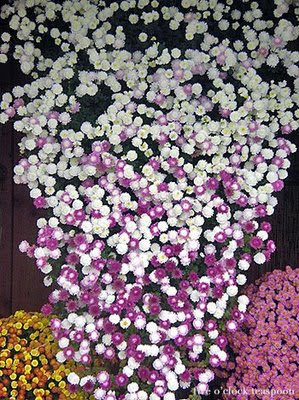 
The Ogiku, or "Single Stem" style features a tri-color pattern of kiku. The combination of lavender, yellow, and white are associated with equine regalia of the Japanese court. The six foot high blooms are propagated from one cutting. 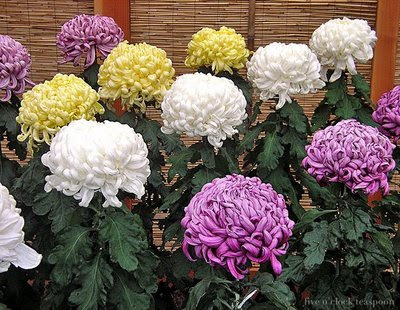 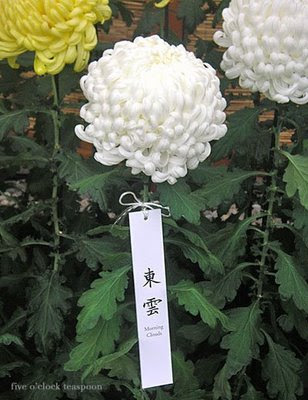 "Morning Clouds" in the Ogiku style.

Shino-tsukuri, or "Driving Rain," is a new addition to this year's exhibit. Thirteen pots are arranged in two rows, with 27 branches in each pot. The semicircular arrangement of each variety echoes the movement of falling rain. Edo, the variety on display, is composed of three types of petals, each kind growing in a different direction, lending the blooms a pinwheel-like appearance and the sense of a paused moment amidst their kinetic flurry. 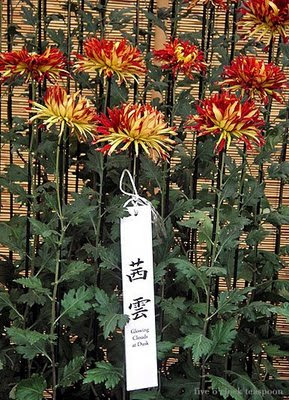 "Glowing Clouds at Dusk" in the Shino-tsukuri style. 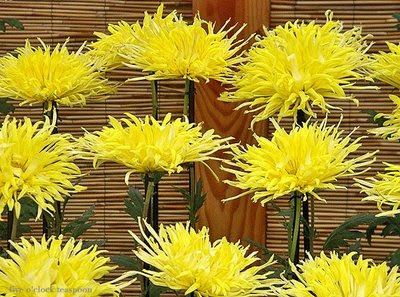 "Golden Bird" in the Shino-tsukuri style. 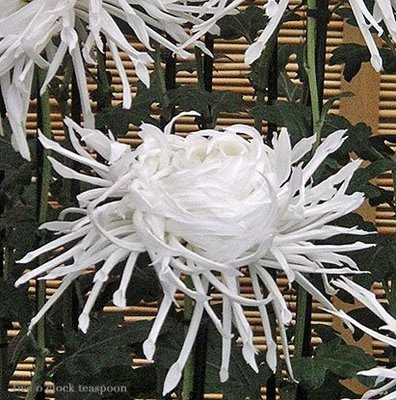 "Snow on Distant Mountains" in the Shino-tsukuri style.

The chrysanthemum was brought to Japan from China in the 8th Century CE. Over time it has become one of the flowers most evocative of Japanese culture, along with the cherry blossom. As a symbol of longevity and the season of Autumn, the chrysanthemum is commonly depicted in the arts of Japan, including painting, decorative arts, and literature.

The compelling quality of this art is satirized in a Chinese folktale that became popular in Japan. Known in the West as "The Chrysanthemum Spirit," the story was retold by the writer Osamu Dazai in 1941. In his version Sainosuke, a kiku-obsessed man, meets Saburo, a poor, younger man with an exceptional ability to grow kiku effortlessly. Although unable to control his jealousy, Sainosuke marries Saburo's beautiful sister, Kie. After years of living with envy and frustration over his inability to reach the level of Saburo's talent, Sainosuke accepts his own mediocrity. Soon after, while the threesome is on a spring outing, Saburo, at the peak of contentment after drinking sake, turns into a chrysanthemum seedling. Realizing then that his brother-in-law Saburo and his wife Kie are in fact supernatural beings, Sainosuke feels a new appreciation for them and plants the seedling in his garden. When autumn comes, a single bloom appears, tinged with a drinker's rosy complexion and the subtle fragrance of sake.

Playful stories such as this are one of the many examples where chrysanthemums appear in Japanese literature. 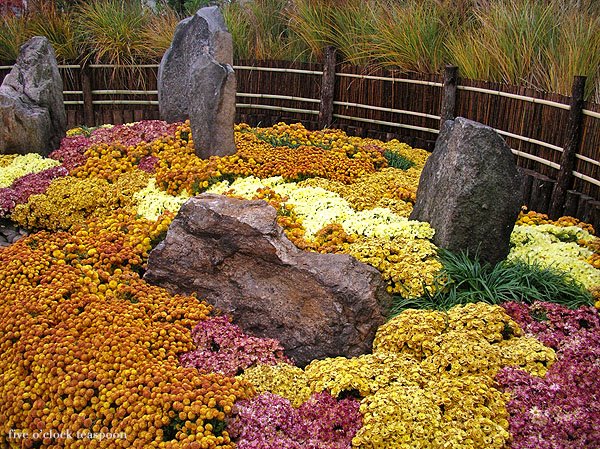 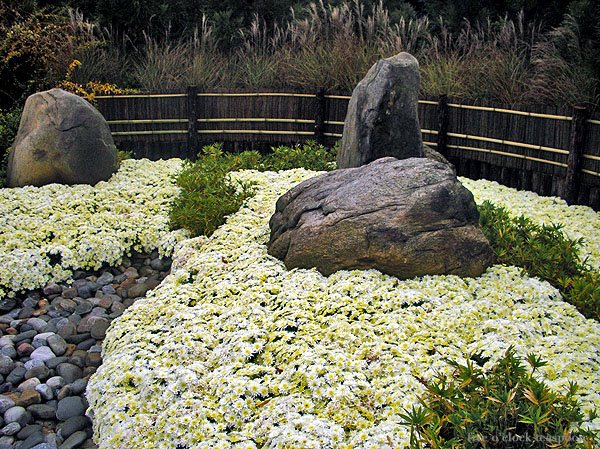 The mix of white and yellow kiku suggests a winter scene, with mountains towering over snow covered hills. 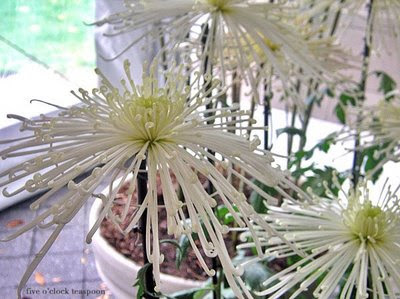 The kiku exhibit is complemented by the NYBG's beautiful Japanese maples, which are at the peak of their fall colors in November. 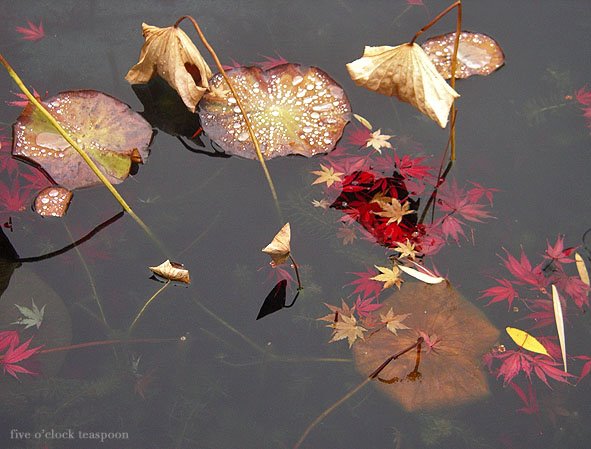 
See highlights from the 2009 exhibition here.
Posted by the five o'clock teaspoon :: fiveoclockteaspoon.com at November 11, 2008 3 comments: