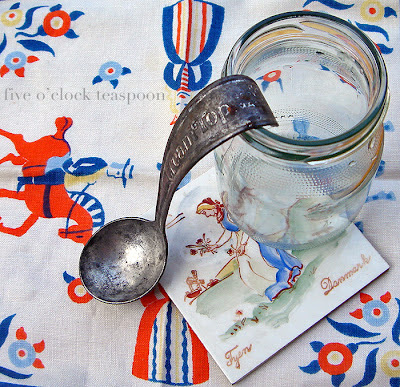 The Cream Top separator, a humble metal ladle, was designed for the purpose of separating cream from milk in a particular type of milk bottle. Before homogenized milk became widespread in the late 1940s, milk bottles typically featured a top layer of cream-- the fat that naturally rises to the milk's surface.  Cream Top bottles featured a bulge at the cream line where the ladle could rest.  The end of the ladle doubled as a bottle opener and hooked on to the bottle's rim, allowing one to tip over the bottle and pour out the cream using only one hand. 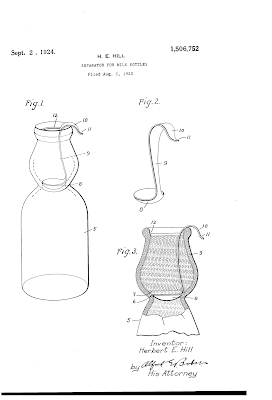 "Something More Than Just a Bottle of Milk"

During the first half of the 20th century in the United States, milk industry practices and the consumption of milk became increasingly standardized by the federal government.  After a century of  milk contamination scandals, measures such as the requirement of pasteurization and the institution of federal milk programs in schools sought to instill public trust in milk as a safe, nutritious food and thus increase consumption of domestic commodities. In early 20th century advertisements, milk is consistently billed as a pure, simple source of nutrition, yet each manufacturer emphasizes a quality that makes theirs different.  See my posts on Selling Milk Between the Wars, Parts I and II. With the Cream Top Corporation, it was the efficiency of their specially designed bottle and the quality of the cream ("so thick it whips instantly"), targeting 1930s housewives in charge of family meal planning.


"Luxury Without Extravagance"
During the Great Depression, Cream Top advertised the idea of cream as an economical luxury.  The recipe booklet below encourages home cooks to use cream in every meal, thereby adding an element of luxury to even the sparest of ingredients: "[cream] adds interest and flavor to soups, salads and even meat courses.  It often transforms left-overs into royal dishes as if by magic...yet it's so simple to use.  Without fuss or bother, you can quickly 'make' whipped cream."  As milk bottles were gradually replaced with paper cartons in the 1940s, the Cream Top bottle faded away. 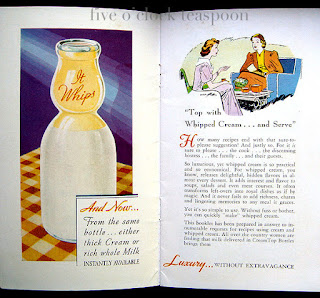 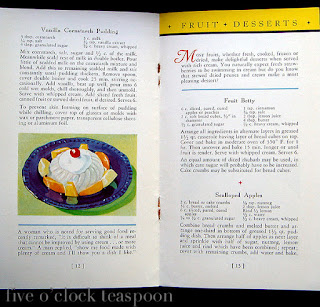 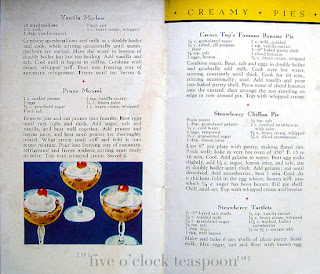 More on milk from the archives:
PET Milk and the Business of Feeding Babies
Selling Milk Between the Wars, Parts I and II
Posted by the five o'clock teaspoon :: fiveoclockteaspoon.com at May 23, 2012 1 comment: