"And the Dish Ran Away With the Spoon": Mythical Foodscapes in Children's Literature
Part III: Raggedy Ann's Wishing Pebble

American writer and illustrator, Johnny Gruelle (1880-1938), created the Raggedy Ann character in 1915 for his daughter, Marcella, and in 1918, published the first of many books recounting the delightful adventures of the playroom rag doll, Raggedy Ann, and her brother Raggedy Andy. Although they live in an idyllic world of bucolic settings and benign fairies and animal friends, the Raggedys encounter malevolent creatures that they nevertheless face with courage and kindness. It is their kind, fearless nature, and rosy outlook on all things in life that make these stories so charming. The opening lines of The Camel with the Wrinkled Knees (1924) captures these qualities:

Raggedy Ann and Andy lay in their little doll beds, smiling up through the dark at the top of the play-house. It was very still and quiet in the play-house, but the Raggedys were not even a teensy-weensy speck lonesome, for they were thinking so many nice, kindly thoughts. And you know, when one thinks only lovely, kindly thoughts there is no time to become lonesome.


As a child, the Raggedy Ann stories were some of my favorites, yet it was not until recently that I came to consider the significance of the many striking depictions of food that often play a role in these fanciful tales. One such foodscape that I have always remembered, however, is that of the magic ice cream soda fountain, conjured in a wish by the Raggedys in, Raggedy Ann's Wishing Pebble (1925). 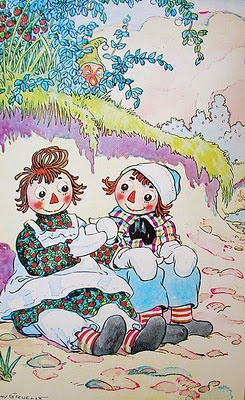 Raggedy Ann and Andy after finding the wishing pebble.


The story begins as the Raggedys make the acquaintance of Mr and Mrs Muskrat, a friendly couple who lavish them with pancakes (which unfortunately the Raggedys cannot eat lest the food contaminate their cotton filling). Later Raggedy Ann discovers a smooth, round stone which she believes may be a wishing pebble. To repay the Muskrats' kindness, the Raggedys decide to wish for them an ice cream soda fountain and a lollipop garden. The soda fountain is indeed magical because it produces an unlimited supply of several flavors and one can drink as much as one wants without feeling sick. Remarkably, even the Raggedys are able to consume the drink (with a straw that is poked through a hole in their mouths made by Mrs Muskrat) without staining themselves. While all of the Muskrats' friends enjoy this bounty, a selfish elf named Mister Minky (seen spying on the Raggedys in the first image) steals the magic pebble and, before running away, wishes for their sugary delights to disappear, starting the Raggedys on a journey to find the pebble and set things right. Such references to sugar and bountiful sweets appear frequently in Gruelle's books, tantalizing and captivating the imagination of children. Yet, these saccharine confections also help convey a greater message, which I discuss below. 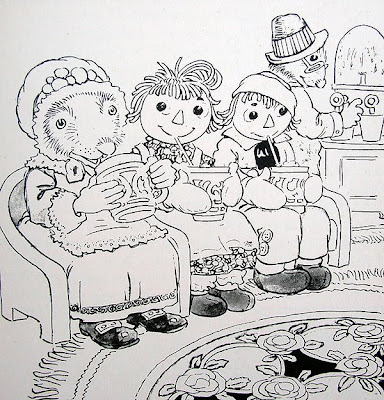 The Raggedys enjoy ice cream soda with the Muskrats. 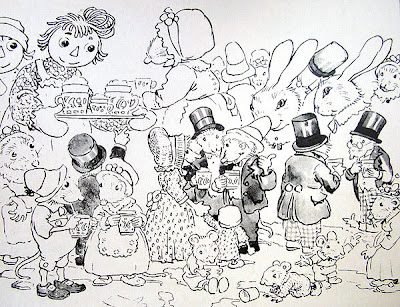 Everyone is invited for ice cream soda at the Muskrats' house.

Purity is a leitmotif that runs through the Raggedy Ann stories, contributing to a broader belief in the triumph of virtue. The innocence of a child's heart can be found in the Raggedy Ann character, whose own heart is made from candy and imprinted with the words "I love you." Allusions to the untainted appear elsewhere, such as in the description of Raggedy Ann's stuffing of "nice white cotton," which she is careful not to sully with food. The superficial purity of white sugar supports this analogy, yet reveals a dark side as well. As the treasured fountain and lollipop field are selfishly snatched away, they are replaced with discontent and desire. Sugar thus comes to represent both the child's purity of heart and a mode of corruption. Although the story ends well with the return of the soda fountain and lollipop garden, it conveys a cautionary message against selfishness, hinting at the pitfalls of becoming consumed by possessions and material comforts. 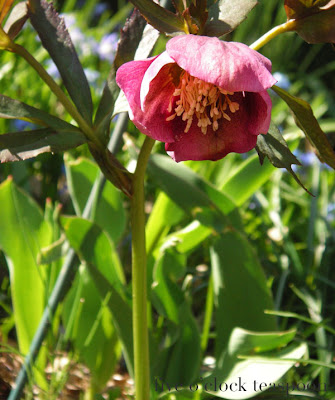 Posted by the five o'clock teaspoon :: fiveoclockteaspoon.com at April 12, 2011

Thanks for the provocative memories re the Raggedy books. I haven't read any for many decades, but now I'm thinking about Gruelle's food images and metaphors. One I particularly remember is in (I think) Raggedy Ann in Cookie Land, where a character explains "wind sandwiches." As I recall, he cuts two slices of wind and fills them with another slab of wind for a convenient and satisfying sandwich. This clearly made an impression on me; I still remember that image from time to time, especially when I'm hungry.

Now, in retrospect, I'm connecting this passage to real-life instances where people imagine food in deprived or even starved circumstances, like the recipe exchanges/collections developed in concentration camps, or the elaborate fantasy meals that Gertrude Stein and Alice Toklas planned together during WWII.

Indeed I was planning to revisit Cookie Land in the next post! I love the image of wind sandwiches made by the Snitznoodle character. One of my dogs has a habit of licking the air at times, which I refer to as his wind sandwiches.
You bring up a fascinating subject with fantasy meals. To add to your list, I recall many imaginary meals in Yu Hua's Chronicle of a Blood Merchant, set in Mao's China.

How vividly I can recall the sumptuous descriptions of
the landscapes and food in Johnny Gruelle's stories.
I also remember with equal pleasure those in the
Uncle Wiggily books of Howard R. Garis. They stay with
you forever. And, yes, they probably do compensate
one during times of deprivation. Thank you for the
reminder.