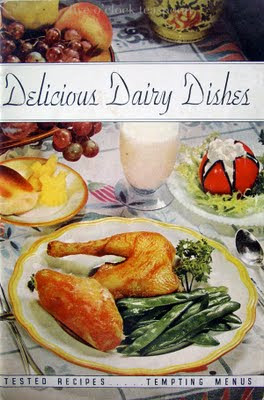 Borden-Wieland. 1937. "Delicious Dairy Dishes," presented by Crowley's Milk Company, Inc. (promotional booklet). Meta Given and Ruth Cooper (contribs.) 62pp. Illustrated in color.
The Crowley Dairy Company was founded in Poughkeepsie, NY in 1904 by J.K. Crowley. In 1915 the company moved to Binghamton where its headquarters remain today. Because "Delicious Dairy Dishes" (hereafter DDD) is copyrighted by Borden-Wieland and 'presented' by Crowley, I suspect this may have served as a general dairy industry booklet that individual, regional brands could co-opt for marketing purposes.

Over twenty years after "The Story of Carnation Milk" was published, science continued to offer a useful language for marketing consumer goods. In comparing the two milk industry booklets we see that in both cases the recipes are devised to encourage home cooks to use milk in everyday cooking. While the Carnation booklet attempts to convince those who may already be loyal milk consumers that canned milk is a superior, technologically sophisticated alternative, the authoritative tone of the Crowley milk booklet highlights scientific proof of the important vitamins and minerals found in "fresh" dairy foods.

Unlike Carnation's evocative pastoral scene, the cover of DDD features no landscape, just the fruits of industry, prepared according to the tenets of the modern kitchen. The title page reads, "Recipes tested and approved by Meta Given and Ruth Cooper, Specialists in Home Economics." In addition to recipes, the text includes several essays by the authors. Whereas Carnation describes its milk production processes as being supervised by "careful, experienced men", in DDD the focus has shifted to the kitchen, organized according to the philosophy of home economics, a term that gained currency in the early 20th century and was widely used by the booklet's 1937 copyright date. 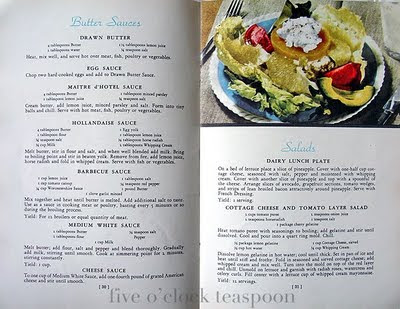 The introduction page appeals to the health and economic concerns of people during the Depression years, stating,"Milk is the original food and nearly as perfect as you will find. It does more for the body than any other food and does it more cheaply. There is no substitute for milk." The introduction boldly asserts that, "Nutritionists advise that one-fourth of the food budget be spent on milk and its related products. With milk furnishing so much for so little outlay of money, this advice must be sound. So for good health and a long, happy life, use milk and dairy products abundantly."

Milk's beneficial components are then dissected and explained:

All model diets give milk a very important place because: Its
1. Protein is ideally adapted for body growth and repair
2. Sugar (lactose) is helpful in preventing digestive disturbances
3. Minerals (calcium and phosphorous) are easily absorbed and ideal for bone and teeth building.
4. Vitamins (A, B, and G) make this an important source with some trace of vitamins C and D.

As also seen in the PET Milk pamphlet, the emphasis on vitamin content reflects early 20th century health concerns, such as mineral and vitamin deficiencies. The scientific discovery of vitamins in the first quarter of the 20th century and eventual synthesization of vitamins, beginning with vitamin C in 1935, helped remedy nutrition deficiency illnesses such as rickets.

Essays on "The Daily Diet," "Butter Cookery," and "Hints on Vegetable Cookery" further explain the nutritional importance of dairy foods. While butter came to be characterized as unhealthy in the late 1960s due to saturated fat content, DDD champions its healthiness: "A food so high in vitamin A content is valuable in the protection against eye trouble known as Xerophthalmia and against diseases of the upper respiratory organs...Where foods of high caloric content must be cut out, butter should never be on this list, because of its vitamin content."

Despite their slightly different agendas, both milk industry booklets combine recipes for popular dishes with information about the production methods or nutritional content of the product and are designed for home cooks. The latterly published DDD shows several additions and alterations in recipe conventions. A section on hors d'oevres suggests an increased interest in entertaining guests, and the use of regional and international location names in recipe titles, such as Southern Corn Pudding, Coffee Bavarian, and Mexican Orange Candy, may have appealed to a desire for urbanity and an air of cosmopolitan sophistication in the Depression era. Despite being published during an economic crisis, DDD eludes the use of tinned ingredients and items such as lentils, highlighted in the Carnation booklet as "economical."

Promotional recipe booklets are interesting artifacts; while they cannot be depended on to accurately reflect the tastes of the period (unlike cookbooks they lack a measurable value) recipe booklets do portray what companies thought consumers would respond to. Because taste and consumption habits shape and are shaped by such advertising material, these historical documents deserve close reading. 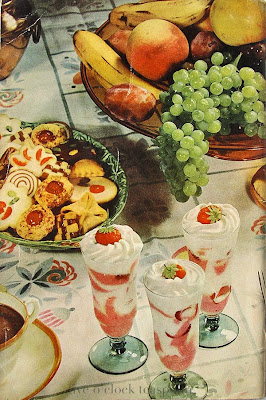 Posted by the five o'clock teaspoon :: fiveoclockteaspoon.com at July 31, 2011 3 comments: