Quotation Menus: Imagination of a Feast, Part I

When food appears in literature it can be as striking and full-bodied as the most memorable characters or as mundane as the ground beneath them. In either case, it can be interesting to explore the edible element further, as have many scholars in genres ranging from myth to mystery. Such readings of food typically analyze the relationship between the characters, the food they eat (or don't eat) and the way they eat it, looking for symbolic clues and metaphors that relate to the story's themes.

There is another approach altogether found in writing that is dedicated to recreating food in literature. From the fanciful musings in Mark Crick's Household Tips of the Great Writers to blogger Anna the Red's meticulously rendered Ghibli feast (reconstructed after the Miyazaki anime films) such works are part cookbook, part tribute and often feature significant historical research and analysis. For these writers the challenge is to fabricate the fictional meal, often with just a few words to go by.

Madge Lorwin's Dining with Shakespeare (1976) is a delightful, sumptuous exploration of what she terms quotation menus-- period dishes inspired by quotations from Shakespeare's plays.  Building on the success and enthusiasm of a collation she prepared after a performance of Twelfth Night, Lorwin began an annual feast, with each menu planned in accordance with a particular Shakespearean play.  As Lorwin argues, "Shakespeare makes frequent and effective use of cooks and cooking, eating and drinking.  In fact, there is not a play in which he has not woven some scene around food or drink, or based some simile or metaphor upon them.  He uses these to create an atmosphere, set a mood, bring out the lineaments of character.  The homely, everyday activities relating to food Shakespeare turns into scenes of poignance, tragedy, or comedy." 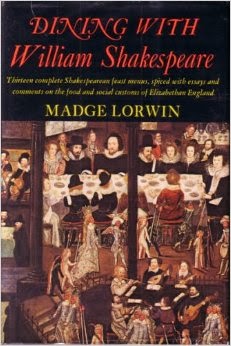 Lorwin provides insightful details about dining and entertainment (which often occurred simultaneously) in Elizabethan England, including the types of flatware and serving pieces used, and the role of servants.  Referencing period commentary, she also describes the general attitude towards food and diet in Shakespeare's England, both from the point of view of the English and Continental travelers.   But her contribution to this genre goes beyond discussing the role of food in Shakespeare's work. Often with the help of her husband, a beloved professor of European history at the University of Oregon, Lorwin sourced recipes from contemporary authors such as Sir Hugh Platt (1552-1608) for the dishes that would have appeared in Shakespeare's world.  She provides the originals as well as her modern adaptations.

Lorwin obviously delighted in planning her quotation menus, which range from A Bill of Fare to Celebrate Shakespeare's Birthday ("At thy birth, dear boy,/ Nature and Fortune join'd to make thee great.") to A Repast for Viola ("I will bespeak our diet,/ Whiles you beguile the time and feed your knowledge.")  My favorite is A Midsummer Night's Banquet.  With marzipan and muscadines, or kissing comfits (a perfumed sugar plum), shell bread, suckets of lemon peels, candied violets, quince paste, fresh strawberries and cream, and white gingerbread, it lives up to the enchanting mood of the play and the season.  As Titania instructs her fairies in service of Bottom, "Feed him with apricocks and dewberries,/ With purple grapes, green figs, and mulberries."

Perhaps by making and eating the food of our favorite books we feel we may enter their world, experiencing it physically rather than just mentally. Like Alice's initiation to Wonderland, a piece of a special cake may be all that is necessary to to transport ourselves to another time and place.  I prepared a dish from the birthday menu-- A Sallet of Boyled Leeks--from A New Booke of Cookerie by John Murrell (1615).  Soft, parboiled leeks are dressed with butter and vinegar,-- a favorite medieval salad dressing--garnished with hardboiled eggs, and served atop crusty bread.


A Sallet of Boyled Leeks

from the working version in Dining with Shakespeare

Cut off the roots and green parts of the leeks and discard them.  Wash the white sections in several cool waters until they are free of sand.  Then drop them in boiling water for five minutes.  Drain and cool until the leeks are comfortable to handle, then mince or slice them very thin.
Melt the butter in a small saucepan and add the vinegar, minced leeks, currants, brown sugar, cinnamon, and ginger.  Cook over very low heat until the leeks are tender, stirring them occasionally. Peel and quarter the eggs.
Arrange the toast quarters in a heated serving dish.  Spoon the leeks over them and garnish with the quartered eggs.

Read Quotation Menus, Parts II & III, then dream up some of your favorite fictional feasts.
Posted by the five o'clock teaspoon :: fiveoclockteaspoon.com at February 07, 2014 No comments: