The Malay word agar-agar (jelly) is also the common name for red algae such as Gracilaria lichenoides or Gelidium amansii, originating in the coastal waters of the Mediterranean and East Asia. For cooking purposes, agar can be found in either powdered or dried form in Asian supermarkets. When dissolved in liquid, heated, and then cooled, agar transforms into a moldable jelly. Odorless and vegan, agar-agar is a superior alternative to gelatin or isinglass and is used in many East Asian and South East Asian desserts. 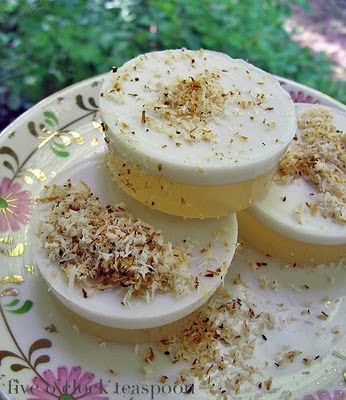 Talam Agar-Agar, a Singaporean and Malaysian favorite, flavored with coconut and rose.

In the 19th century, South East Asian agar was introduced to the West, where the plant's properties began to be exploited for industrial use. Yet this marine plant has a long history in human consumption. Early Chinese texts such as the the agriculture and pharmacopeia classic Shen neng ben cao jing (ca. 1st century BCE to 1st century CE), record using 海藻, or haizao (sea grass or seaweed) to cure goiter. The bitter and cooling nature of the plant was believed to have a balancing effect on the internal organs. Later in the Yuan dynasty (1271-1368), red algae-- 海菜, or haicai (sea vegetable)-- is recorded for the same use (H.T. Huang, Science and Civilisation in China, v. VI: 5 Cambridge: Cambridge University Press, 2000, 575). Such texts record soaking the plant in wine, to be taken as a tonic, or grinding it and other medicinal ingredients into a powder, which was then compressed into a soluble capsule. 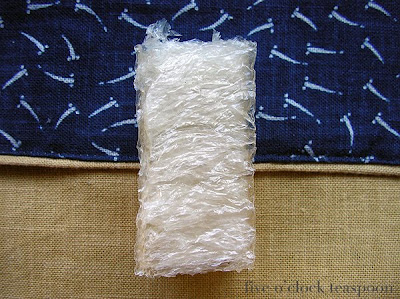 Japanese Kanten
In Japan, the gelatinous product of red algae is known as 寒天, or kanten (cold or frozen sky), and is often used for sweets such as yokan. Today, the technique for extracting kanten is derived from a method documented by Tarazaemon Minoya in 1658, in which harvested seaweed was boiled to extract the gel which was collected on trays and left outdoors on winter nights to freeze. 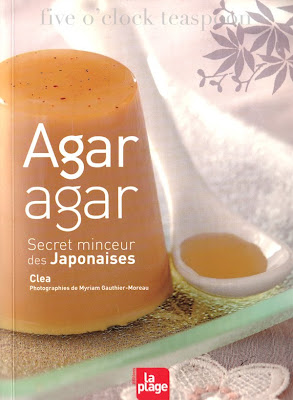 The benefits of using agar in cooking are nicely highlighted in Agar-agar: Secret Minceur des Japonaises, Paris: La Plage, 2007 (The Japanese Secret to Being Slim) by a French blogger known as Clea. Highlighting agar's use in weight loss, Clea points out that agar promotes good digestion and a feeling of fullness. During the 2 years Clea lived in Japan, she observed supermarkets, cookbooks, and women's magazines advertising the slimming benefits of cooking with kanten. Clea's book, written in French, is filled with beautiful recipes for sweet and savory dishes that use agar-agar to embolden the bright flavors and accentuate the vivid colors of fresh produce. Folded into cream desserts such as in a luscious thyme scented crème caramel, glazing a pear and chestnut cake, or embedded in a subtle goat cheese and honey- vinaigrette verrine, agar-agar shines as the secret ingredient. 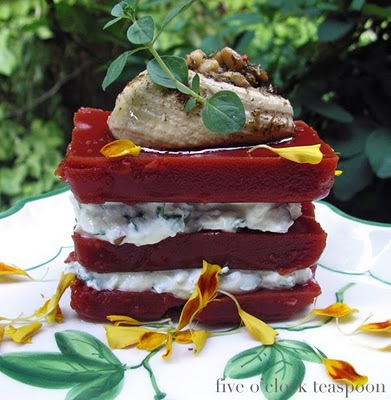 Tomato-Basil and Herb Goat Cheese Terrine
Clea's recipe for Tomato "Burgers" particularly caught my attention. Agar is dissolved into strained tomato sauce and molded into round "burgers" filled with a zucchini slaw and toasted pine nuts. I decided to use my rectangular mini loaf pan to mould the tomato mixture. I then assembled the rectangular blocks with herbed goat cheese in between for a refreshing summer side dish. Because agar solidifies when cooled, it is perfect for make-ahead meals that can be left in the refrigerator until serving time.

You will need a small rectangular mould, such as a 10-compartment mini loaf pan to make 3 terrine.
Ingredients:

1. In a medium saucepan, heat strained tomatoes, water, agar, and 1 basil leaf. Stir occasionally as agar dissolves. Reduce heat and simmer 5-10 minutes. Prepare moulds by rinsing under water. Pour tomato mixture into mould and place in the refrigerator 30 minutes, or until firm to the touch.

To assemble:
Carefully remove 1 tomato slab at a time with an offset spatula, and place on serving plate. Top with a spoonful of goat cheese mixture and repeat. Place a tomato slab on top with a dollop of hummus and serve. 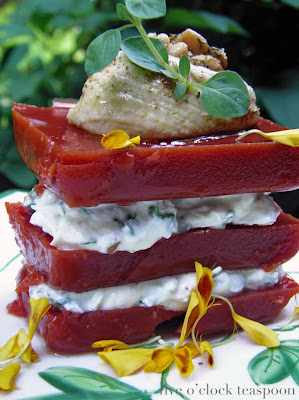 Talam agar-agar is a simple dessert that is perfect on a hot summer night. It is traditionally dyed with food coloring, creating a striking contrast between the colored bottom layer and the white coconut "frosting" but I like the subtle pink hue imparted by rosewater as well. 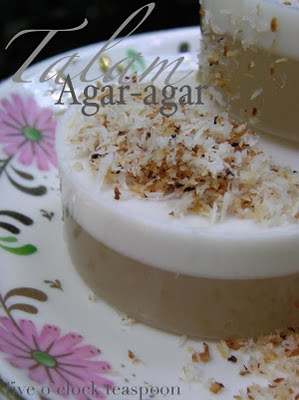 Talam agar-agar is usually made in a tray or cake mould but this recipe uses individual ramekins.
Ingredients:

1. Heat the ingredients for the bottom layer in a saucepan until agar dissolves. Simmer 10-15 minutes. Rinse ramekins under water. Pour liquid into ramekins and place in refrigerator for about 15 minutes to set.

2. Heat the ingredients for the top layer in a saucepan until agar dissolves. Simmer 10-15 minutes. Remove ramekins from refrigerator and pour over the firmed bottom layer. Return to refrigerator for 10 minutes or until set . To serve, loosen the agar-agar with an offset spatula and turn onto plates. Sprinkle with toasted dried coconut and drizzle with some extra coconut milk.