Book Review: The Hour of the Goddess: Memories of Women, Food & Ritual in Bengal 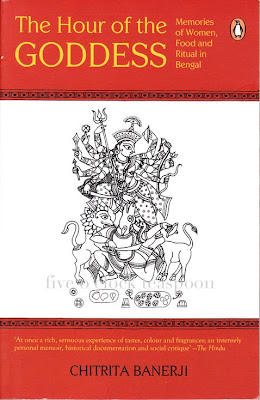 The Hour of the Goddess: Memories of Women, Food and Ritual in Bengal by Chitrita Banerji.
Delhi, India: Penguin, 2006. 144 pp.

Food and ritual are often intimately bound to one another in instances as varied as religious observances and tea ceremonies. In religious rites, food is often used to transcend a spiritual plane, thereby facilitating communication between the corporeal existence of mortals and the elusive world of the divine. In The Hour of the Goddess, food historian Chitrita Banerji describes her memories of food and its associations with Hindu rituals and the roles of women, contextualized within the broad culinary traditions of Bengal. The book is composed of a collection of short essays and will appeal to anyone interested in food and culture. Much of Banerji's discussion is framed by the geography and agricultural practices of India's northeastern Bengal region and the cuisine is indeed informed by the availability of river fish and fertile soil for growing a variety of fruits, vegetables, and grains.

Many of Banerji's early memories of food are connected with worship and the women of her Hindu household who were involved in food preparation, both for the household and for ceremonial purposes. She describes Bengali food conventions and the stories of the gods and goddesses they complement, as passed down by her mother and grandmother. She also considers references from Bengali literature including poetry and epics as well as folk tales, songs, etymology, paintings, cooking treatises, and Ayurvedic texts. In the second chapter, "Feeding the Gods," Banerji recalls her childhood memory of offering food, such as fruit and various sweets, to altar statues of the gods Krishna and his consort Radha, before consuming it herself. Besides an act of obeisance and propriety, this ritual inspired concentration and awareness of the act of eating. As Banerji observed her grandmother's daily offering ritual, she felt that a silent understanding existed between her grandmother and the gods she worshipped, like that of old friends. Her grandmother once told her, "Remember, you are food, because the god who made you is also food. Give him what you love most and you will find it tastes so much better afterwards" (18). As an adult living in America, such rituals gone from her life, Banerji wistfully remembers "the self forgetful joy" of feeding the gods.

Not all of Banerji's reminiscences are pleasant. In chapter 3, "Patoler Ma," Banerji introduces the reader to a frail woman employed by Banerji's family with the physically demanding daily task of grinding fresh spices for the family's meals with the traditional stone shil (mortar) and nora (pestle). Banerji realized the class distinctions inherent in this role when, as a child, she asked the servant about her favorite spices. Banerji writes, "She turned towards me with the saddest smile I had ever seen. 'People like me can't afford to buy garom mashla,' she said, 'we only handle and smell it in the homes of people like you'...What must it feel like, I wondered, to spend so much energy processing ingredients that you may desire but could never obtain?" (33). Banerji points out the inequities often present in food systems, and indeed the consumption of spices is historically linked with privileged social status (see for instance my post on saffron).

Benerji's detailed and thoughtful discussion is a pleasure to read and recipes appear at the end of several chapters. While recipes are not provided for every dish mentioned, Banerji describes the dishes so well that reproducing them is not hard. One of my favorite chapters is ""How Bengal Discovered Chhana," featuring an intriguing bit of food history pertaining to milk-based sweets and the introduction of chhana (acid cured cheese resembling cottage cheese) into this repertoire. Banerji's description of raabri (cream skins floating in thickened milk), originally called dugdha-laklaki, was so enticing that I had to make it. My recipe is below.

Rabri (Creamy Milk Pudding)
Rabri is usually flavored with kewra (screwpine/pandan) essence. Since I didn't have any I used 3 pandan leaves instead.

1. Heat the milk in a wide mouthed pot such as a wok and add the pandan leaves (if using essence, add later). Bring to the boil then reduce heat to a simmer stirring constantly to prevent the milk from sticking to the bottom of the pot.

2. Have a plate nearby and remove the milk from the heat. Fan the surface of the milk and when a skin develops, gently skim it off with a wooden spoon and put it on the plate. Return pot to the heat and simmer and stir for half a minute, then remove from the heat and skim again, placing the skin on top of the first skin. Repeat this process until you have about 10 layers of milk skin. By this time the milk should have reduced and thickened slightly. Add the sugar and kewra/pandan essence (if using) and allow to cool to room temperature.

3. While milk cools, place the dish with the layers of milk skin in the refrigerator for about 30 minutes to solidify a little. Remove from the refrigerator and cut into 2-4 pieces. Divide the thickened milk in the pot between bowls and gently slide one of the milk skin pieces into each bowl and serve.

Cooking in Calcutta
Cook Like A Bong
The Calcutta Wallah
Posted by the five o'clock teaspoon :: fiveoclockteaspoon.com at February 28, 2010 2 comments: