A selection of published writings.

Seddon, Klara. "From Bento to Blog: The Digital Culture of an Everyday Japanese Meal" in Food and Everyday Life, ed. Thomas Conroy. Lexington Books, 2014.  Despite its relatively simple concept (i.e., a meal in a box) the bento has historically adapted to social mores, evolving into specialized forms that reflect the needs of the time.  In examining the bento blog—an exhibition platform—one sees not so much a change in the form of bento, but a change in the way bento is used as a medium for expression. This chapter examines the bento blog as a material product of identity narration, exploring the conceptual boundaries of this everyday food and its collocated identity with family and the home, and considers how the roles and expectations associated with food provisioning are reconciled in food blogs, concluding with a discussion of the implications of such digital food relationships. 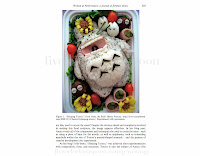 Seddon, Klara. “Bento Blogs: Japanese Women’s Expression in Digital Food Culture,” Women and Performance, 21, no. 3 (2011): 301-319. For many Japanese mothers today, the bento (boxed lunch) that they prepare for their children is an expressive medium, used to construct intricate images that reference popular culture.  Bento weblogs, through which Japanese and non-Japanese women regularly publish their food-based creations on the Internet, have become increasingly prevalent both in and outside of Japan.The bento’s purpose thus transmutes from an intimate communication between preparer and consumer into a supportive public discourse between peers.  Blogs offer a visual and literal articulation of the effort that goes into these otherwise ephemeral creations.

Seddon, Klara. 2008. Tearooms and Teahouses: Expressions of Literati and Merchant Culture in Late Ming China [PDF] examines both the public and private settings for tea consumption in the Ming period and their relationship to one another.  It illuminates the roles of the various participants at the time, including scholars in and outside of officialdom, middle and upper level merchants, and female courtesans who catered to young intellectuals and merchants in public teahouses, thereby contributing a new analysis of late Ming social factors that made the teahouse important.  The cultural expression of scholars and merchants in tearooms and teahouses is further contextualized within the current vogue for traditional style teahouses in modern China. A reformatted version of my Master's thesis.