At the Museum of Modern Art's Counter Space show, mentioned in the last post, a small utensil from the 1950's caught my attention. Known as a cookie cutter wheel, it is composed of several cookie cutter shapes fitted onto the spokes of a wheel, with a plastic handle. This simple contraption would allow the home baker to quickly and effortlessly stamp out a chain of perfectly cut cookies by rolling the wheel over the cookie dough as with a rolling pin. Although this piece is not included on the Counter Space website, I found an image of a similar vintage model here. While kitchen gadgetry is not unique to the 20th century, the low-tech, and indeed superfluous cookie cutter wheel typifies a period when domestic efficiency was marketed through an increasing array of modern appliances.

One method of promoting such kitchen tools was to align the product with a food manufacturer. A patent for a cookie cutter wheel was filed on October 6th, 1925 and issued in September of 1929 to inventor Cleveland P. Carney with the Calumet Baking Powder Company (est. 1889) acting as assignee. By matching up comestible products such as baking powder with associated gadgets, manufacturers could generate and reinforce consumer interest in both commodities, thereby saturating the kitchen with a range of commercial goods. 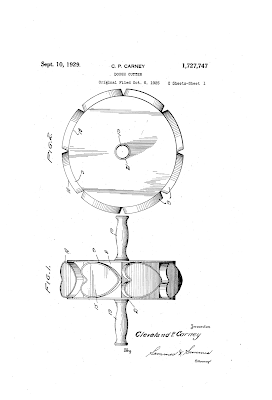 Posted by the five o'clock teaspoon :: fiveoclockteaspoon.com at November 12, 2010 2 comments: