Elizabeth David and the Mystery of Petits Pains au Chocolat 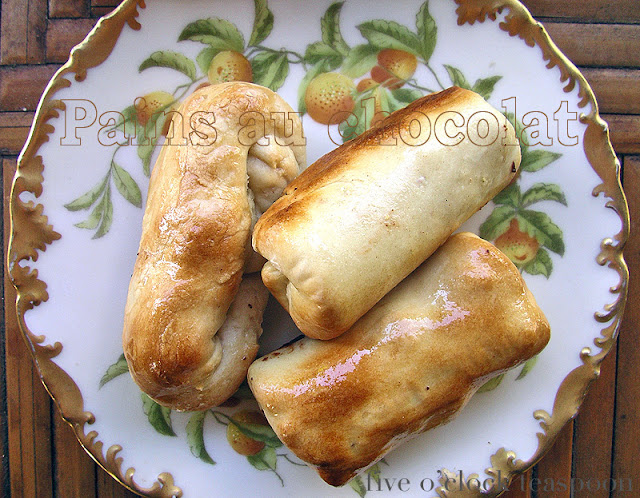 The pain au chocolat one sees in bakery displays in and outside of France is made with a flaky puff pastry dough also used for the crescent, or croissant.  I've always found the combination of puff pastry and chocolate a bit too rich and cloying.  If you've ever dipped a French baguette in melted chocolate, you might agree that a crusty bread dough, made without butter fat, is a much better match.  In her inspired classic, English Bread and Yeast Cookery (1977), Elizabeth David (1913-1992) describes her memory of petits pains au chocolat while in Paris in the early 1930s:

When I allowed myself time, I could stop to buy a pain chocolat to eat in the tram on which I travelled from Passy to the Boulevard Saint Michel to attend lectures at the Sorbonne.  The chocolate in these rolls-- I have remembered it all my life-- was of that rough and gritty quality which no longer exists in France because the chocolate merchants have perfected their machinery to the point where all their products emerge smooth, bland, shining and uniform.  And nowadays, the bakers use their second-best flaky pastry or third-quality croissant dough to make their pains chocolat.

According to David, prior to World War II, French bakers typically used a simple bread dough to encase the bars of chocolate, and not puff pastry.  By the 1970s, when English Bread and Yeast Cookery was written, David observed that in France, this dough had been replaced with a lesser quality puff pastry, a shift she confirms by consulting recipes from "old French books on bread."  Since David does not cite which books she consulted or provide a publication date, it is difficult to determine whether she simply means pre-war cookbooks from the early twentieth century or earlier examples.  At what point in history did the chocolate rolls David describes arrive in French bakeries, and when did the the version made with croissant dough come to characterize the typical pains au chocolat?

A survey of the petits pains au chocolat in nineteenth century cookbooks suggests a different style of chocolate dessert.  For instance, in the 1868 cookbook, La bonne cuisinière bourgeoise, by Lina Rytz née Dick, a recipe for pains au chocolat instructs one to blend chocolate into a dough with sugar and egg yolks.  Stiffly beaten egg whites are then folded in, aerating the dough.  Almond flour is then incorporated and finally the mixture is baked in a buttered form.  This seems to be more in the style of pain à la duchesse and pain à la reine,  both likely antecedent to today's éclair.  It was not until the early 20th century, when a new method of bread baking came to France, that pains au chocolat took on a different meaning in French cookbooks.

French bread baking underwent significant adaptations in the mid-nineteenth century with the introduction of the Vienna oven, which redistributed the oven's heat through steam injectors and a sloping floor.  It was in conjunction with Vienna bread's yeasted milk dough that I began to notice David's style of pains au chocolat in French cookbooks.  The earliest mention I found of yeasted milk dough came in the 1928 (7th edition) tome, Gastronomie pratique, written by Ali-Bab (Henri Babinski).  The recipe is titled, Petits pains viennois, or Small viennese loaves, and includes flour, yeast, salt, milk and water.  Ali-Bab says they are served at buffets and "les five o'clock tea."

In 1933, a similar recipe for Petits pains au lait appeared in La boulangerie d'aujourd'hui by Urbain Dubois.  According to Dubois, this dough is also known as fougasse, although I'm not sure why, since pain fougasse is a regional French flat bread.  In Dubois's recipe milk powder replaces the milk and butter or margarine and one egg or yellow coloring are added as well.  After this recipe, Dubois describes a variation in which the dough is wrapped around a piece of baker's chocolate.  In the 1935 classic Traité pratique de panification française et parisienne, Émile Dufour explains that pain au chocolat is made with croissant dough or fougasse dough (i.e., pain au lait, or milk bread dough).  Thus, by the mid-1930s chocolate was being added to both croissant and milk dough, although according to David, the Parisian bakeries she frequented preferred the latter.  The pains au chocolat of Elizabeth David's memory were indeed short-lived, lasting only a few decades in the first half of the 20th century.  Fortunately they are easy to prepare.

The recipe below is based on David's and includes some additional points I have found useful. David says to follow the method for preparing English bap dough, found in another chapter, and I've condensed the ingredients with those instructions.  David's original recipe calls for 1/2 oz. of baker's yeast. If you are as naive about yeast as I am you will probably assume that this is a poetic synonym for Fleischmann's dry yeast.  It is not.  As David notes in her chapter on yeast, dry yeast is much more powerful than baker's yeast and as a substitute, one need use only about a half or one third of the amount of baker's yeast listed. Too much yeast yields a dense dough that stales quickly. Another important point: these are by far the most delicious pains au chocolat you may ever try but they must be eaten straight from the oven, so ignore the temptation to double the recipe and save some for later.

1. Sift the flour and salt in a bowl.  Pour warm milk into a large mixing bowl, sprinkle yeast on top and stir to dissolve.  Test yeast activity with a teaspoon of sugar if necessary.  If active, bubbles will begin to appear within 10 minutes.  Add the sifted flour and mix well.  The dough will be dry and shaggy.  Knead in the bowl or on a clean surface a few times to bring the dough together smoothly.  Do not over knead-- a few times will be sufficient.  Holding the dough in your hands, shape into a smooth ball about the size of a small grapefruit.  Place dough in a large bowl, cover with a lightly dampened cloth and set in a warm spot.  Rise until doubled, about 1 hour.

2. Preheat oven to 400-425°.  Divide dough into eighths.  Roll out and place a piece of chocolate into the center.  Fold the dough over the chocolate, pressing the seams to seal if necessary.  Place on baking sheet, cover with cloth and let rest 15 minutes.  Remove cloth, place tray on center rack in oven and bake 15-20 minutes, until tops are golden.  Meanwhile, prepare the glaze by dissolving the sugar in warm milk.  When the bread is ready, remove from oven. Chocolate will probably have spilled out onto the baking pan-- this is perfectly fine and will be very delicious to eat off the pan. Immediately brush pains with glaze until all glaze has been used.  Serve immediately.

For more on David, see this very informative, thorough, and well written article on Elizabeth David, in the excellent online magazine, British Food in America.

Posted by the five o'clock teaspoon :: fiveoclockteaspoon.com at November 08, 2012

Wow - this is such an interesting piece of bread history. Beautiful, well-researched, thorough - and tempting too! My mouth is watering after reading it. I can't wait to try a *real* pain au chocolat!

I've always enjoyed reading Elizabeth David's
writings as they were beautifully precise and engaging in their portrayal of food history and of the ingredients she was referencing. Your post expresses her perfectly,
and I learnt something new as a result. Thank you so much!