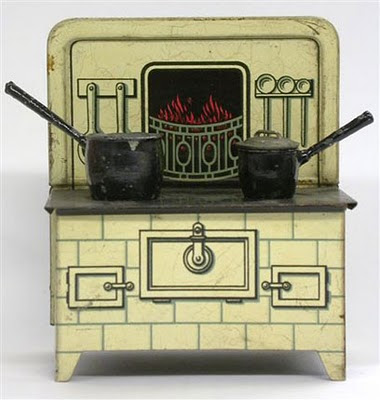 Dolls' house stove, tin, English 1930-1960
shown in "Food Glorious Food" at Museums Sheffield and traveling to the V&A's Museum of Childhood
The kitchen is defined as a place where cooking is carried out. To this end it is usually characterized by the presence of a heat source. While this purpose has not changed since the earliest domestic settlements, the cultural construction of the kitchen continues to adapt according to prevailing attitudes and tastes. The modern Western kitchen, with its focus on efficiency and hygiene, began to take shape during the industrial revolution of the mid 19th century. During this time the use of machinery and theories of productivity came to determine the appearance, function, and concept of the modern kitchen.

Two current exhibitions and an ongoing exhibit online examine this evolving social artifact, tracing the impact of theoretical and technological innovations on the modern Western kitchen since the industrial revolution of the mid 19th century:

"Food Glorious Food"- a UK exhibit described as "a delicious helping of memories from field to fork" is now showing at Museums Sheffield until November 28th, 2010 (you may also be interested in visiting the museum's collection of culinary related Sheffield metalwork). A collaboration between the University of Sheffield, Museums Sheffield and the Victoria & Albert Museum, the exhibit will be traveling to the V&A's Museum of Childhood, where it will be on view from January 29th to May 8th, 2011. Unfortunately, neither museum provides a digital archive of the pieces in the exhibition.

"Counter Space"- a comprehensive, well-edited exhibit at New York's Museum of Modern Art (MoMA). This thoughtful exhibit, deftly curated by Juliet Kinchin and associate curator Aidan O'Connor of the Architecture and Design department, is on view until March 14th, 2011. Divided into sections- "the new kitchen," "the frankfurt kitchen," "visions of plenty," and "kitchen sink dramas"- the show follows developments in kitchen culture and aesthetics from the years after World War I to the present day. Highlights such as a complete, physical example of "The Frankfurt Kitchen," designed by Frankfurt's first female architect, Margarete (Grete) Schütte-Lihotzky (1897–2000) in the late 1920's, are accompanied by lesser-known (but equally exciting) visual material such as posters and utensils, that illustrate the ideals of modern living, embodied in Germany's post-WWI urban apartment complexes. The exhibit is complemented by an excellent website that allows viewers to experience the show's themes and many of the pieces on display, along with relevant videos and additional information.

"In the Victorian Kitchen"- the California Academy of Sciences online exhibit of Victorian kitchen and table tools drawn from the academy's Rietz Collection of Food Technology. The exhibit features sections on British cooking technology, changes in English silversmithing, blue and white Staffordshire, and Victorian dessert moulds.

Because food is a cultural product in as much as it provides sustenance, the kitchen is a complex space upon which the ideals and aspirations of a society are impressed. Exhibits such as these help contextualize this space within broader social movements, but also reveal the significance of the kitchen on an individual level, in viewers themselves.


Also of note: The Los Angeles County Museum of Art's "Let Them Eat LACMA," a year long investigation of the intersections between food, art, and living.
Posted by the five o'clock teaspoon :: fiveoclockteaspoon.com at October 28, 2010 2 comments: