Variation on a Theme: Matzo Charlotte 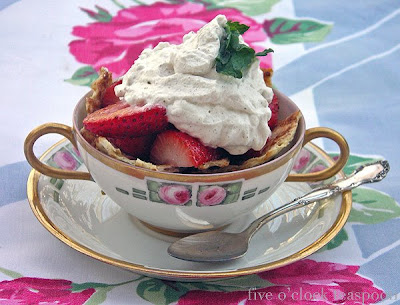 Early and vintage cookbooks are interesting cultural documents for both the recipes and commentary from the time they were written. Many favorite dishes that were once commonplace are no longer among the average cook's repertory. Recently I looked through The Molly Goldberg Jewish Cookbook, a collection of recipes by Gertrude Berg who played the Molly Goldberg character in the popular 1950s TV show, The Goldbergs. A recipe for Matzo Charlotte, interested me. While I had heard of charlotte, a dessert related to the English pudding, I have never had it and I did not know it could be made with matzos, the Jewish unleavened cracker originally made for Passover in observance of the leavening restrictions, but now enjoyed any time of the year. 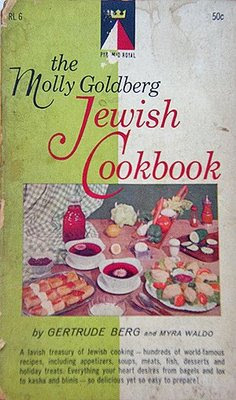 The Molly Goldberg Jewish Cookbook was published in 1955 . This edition is from 1962. It has recently been re-issued and is available from Amazon.com.

Charlottes and Carême
Charlotte dates to the late 18th century and is said to be named after Britain's Queen Charlotte of Mecklenburg-Strelitz (1744-1818), wife of George III. Like bread pudding, which consists of stale bread soaked in milk, charlotte was traditionally made with fingers of sponge cake topped with custard cream and baked, or unbaked in the form of a trifle, with layers of fruit and cream. These flaccid, protean ingredients were carefully assembled in a decorative mould, thereby imposing a standard form on this inherently pudding-like dessert. Many variations in ingredients and form exist, of which the best known is charlotte russe.

Charlotte russe is believed to have been created by Antonin Carême (née Marie-Antoine Carême). Carême, a distinguished French chef, had worked under the patronage of the English court after the death of George III in the early 19th century. While he probably encountered the baked dessert in England, it was at the banquet of Russia's Czar Alexander I that Carême first served charlotte parisienne, a cold, unbaked version of the charlotte, firmed with gelatin, later called charlotte russe.

A Dessert for Presentation
Charlotte was a popular dish throughout the 19th and first half of the 20th centuries in the United States. At the end of a meal, it made a statement of elegance and refinement, yet the dish is quite easy to prepare. The following excerpt from an 1882 New York Times article on entertaining, suggests serving charlotte russe for a dinner party:

Handsome entertainments are expensive, a supper from Delmonico's, or even a more moderate caterer,
represents a sum which can be ill spared from the family exchequer. A mere reception with ice cream
and cake...will not answer the purpose, a dancing party is considered a necessity, and with
it, as a matter of course, a pretty supper.

A recipe for charlotte russe follows with the caution, " To make charlotte russe to perfection is rather a difficult operation and requires care and nicety." The recipe concludes on an encouraging note: "If these directions are carefully followed it will prove a great success." Indeed Carême himself advised the early 19th century home cook, "Bourgeois kitchens of limited means would be wise to follow simple methods and not try to imitate the ways of the grandes." (Aretsy, Esther B. The Exquisite Table. New York: Bobbs-Merrill Co., 1980, 96).

Yet, American cookbooks from the 19th and early 20th centuries, intended for housewives, usually include several charlotte recipes, indicating that the dish had infiltrated the middle class. The Feeding America cookbook archive from the Michigan State University Libraries includes several examples such as The White House Cookbook (1887) and The Lady's Receipt-Book (1847). Charlottes are featured with a variety of fruit fillings such as raspberry, apple, and plum, as well as flavorings such as coffee and caramel. In addition to the charlotte russe, recipes for charlotte polonaise (perhaps the most unusual recipe I encountered-- made with rosewater, chocolate, macaroons, meringue, and dyed green with spinach), francaise, and Italian and Spanish charlotte are also included. There are also recipes for matzo charlotte in The Neighborhood Cookbook (1914) by the Council of Jewish Women and The International Jewish Cookbook (1919) by Florence Kreisler Greenbaum. While Jewish housewives had probably begun using matzo in charlottes soon after the dessert became popular, a relation of charlotte, schalet, had already existed in Jewish cuisine.

Charlotte and Schalet
According to Gil Marks in The World of Jewish Desserts, the word "schalet" is derived from the Old French chald, or warm. Marks states that among the Jews in medieval Europe, the Sabbath stew called schalet (now known as cholent) was often prepared using dough to create a tight seal between pot and lid. The dough, which inadvertently became cooked was also called schalet, and evolved into a pudding dessert in its own right, still known as schalet, now commonly called kugel. While the ingredients of schalet and charlotte differ somewhat, the names are remarkably similar. Is this just a coincidence? Is it possible that the English name was derived from the much older Ashkenazic Jewish pudding and not from a tenuous link to the English Queen? Any insight on this subject is welcome.

With its refined appearance and vague reference to royalty, charlotte was a popular dessert at dinner parties and banquets. Although rarely served today, charlotte still puts on a good show.

This short study of charlotte includes examples I have found from American texts. If anyone has come across any charlotte or charlotte-like recipes in non-American cookbooks please let me know. 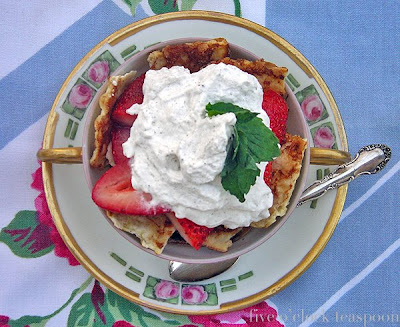 
The charlotte in Molly Goldberg's book was made with orange juice and egg whites. It seemed like the dish was ripe for an update. I wanted a mix of textures that would offset yet complement one another. Treating the matzo in the manner of french toast, I softened it in an egg mixture and then crisped the outside over the stove. I topped the matzo with macerated strawberries and spiced whipped cream.

1. Break matzo into small, rectangular pieces, about 1" by 3". It's okay if they are a little uneven.

2. Mix egg, vanilla, and salt in a shallow dish and soak several pieces of matzo for about 10 minutes.

3. Melt some butter in a hot pan and add soaked matzos. Cook over medium heat for about 3 minutes on each side until golden. Place cooked matzos on a plate lined with paper towels and sprinkle with a little sugar, if desired. Repeat steps 2 & 3 until all of the matzos are cooked.

4. Using about 5 or 6 matzo pieces per serving, line four ramekins or small bowls with matzo. You may need to break them a bit to get them to line up and overlap nicely. Divide strawberries over matzos and top with a big dollop of cardamom whipped cream and mint leaves. 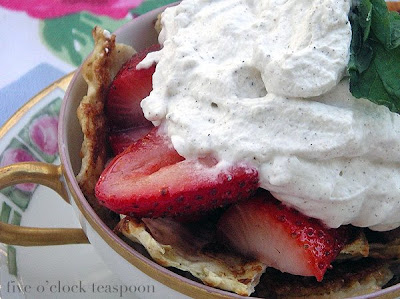 Posted by the five o'clock teaspoon :: fiveoclockteaspoon.com at April 02, 2009 2 comments: