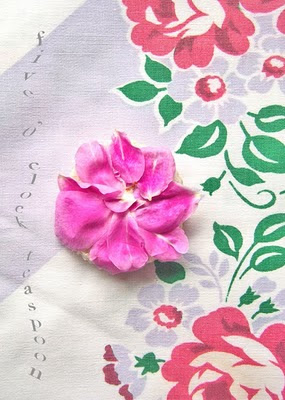 Speaking of the eponymous John Montagu (1718-92), 4th Earl of Sandwich, credited for his innovative method of staving off hunger at the gambling table, Elizabeth Robins Pennell writes: "A hero indeed is he who left the sandwich as an heirloom to humanity. It truly is the staff of life, a substantial meal for starving traveller or bread-winner; but none the less an incomparable work of art, a joy to the gourmand of fancy and discretion" (33). "The Subtle Sandwich" is one of a collection of essays that appeared under the title The Delights of Delicate Eating in 1896. The writer, Elizabeth Robins Pennell (1855-1936), a Philadelphian émigré to London, was a writer and art critic involved in late 19th century arts circles, who took to culinary writing in magazine columns in the later part of her career. Pennell's writing advocated for creativity in the kitchen; her prose, absent of recipes, instead describes food, cooking, and eating, as one would describe art. Indeed that is how Pennell, the all but forgotten predecessor to food writers such as Elizabeth David and M.F.K Fisher, saw it. A connoisseur and collector of early cookbooks, Pennell's impressive collection is accessible in the archives of the Library of Congress in Washington D.C. It seemed fitting to quote her poetic truths in this post, Part II of Sandwiches. See Part I here. The sandwiches I've included below attempt an expansion on the idea of the humble sandwich, but maintain the traits of ease and portability. As Pennell advocates, "Set your wits to work. Cultivate your artistic instincts. Invent! Create! Many are the men who have painted pictures: few those who have composed a new and perfect sandwich"(38). In her characteristic allusion to possible ingredients, Pennell suggests "...the cool cucumber, fragrant from its garden ground, the unrivalled tomato, the crisp, sharp mustard and cress. Scarce a green thing growing that will not lend itself to the true artist in sandwich-making...And your art may be measured by your success in proving the onion to be the poetic soul of the sandwich, as of the salad bowl. For afternoon tea the dainty green sandwich is the daintiest of them all" (40). The setting was important to Pennell as well, completing the eating experience: "lyrical indeed is the savoury sandwich, well cut and garnished, served on rare faience or old silver..." (36). 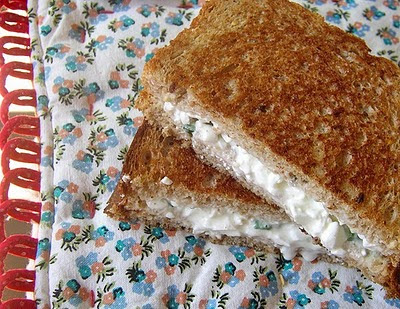 Cottage Cheese Sandwich
For each sandwich you will need:
2 slices of bread
1/2 cup cottage cheese
2 Tbs chopped poblano peppers
1/4 tsp cumin
Grease a griddle or frying pan over medium heat.
Combine last 3 ingredients in a bowl and spread between bread slices.
Place sandwich on hot griddle and cook until golden on both sides. 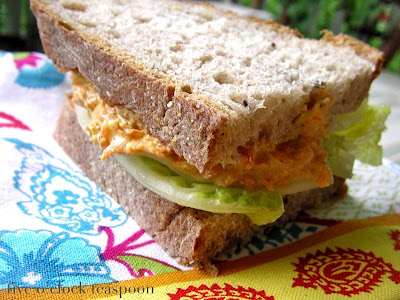 Grated Carrot/Zucchini Sandwich
For each sandwich you will need:
2 slices of bread
lettuce
mustard
1 medium carrot or 1 small zucchini, grated
1 Tbs mayonnaise, preferably Vegenaise
dash of curry powder
Mix last three ingredients in a bowl.
Toast bread, spread one or both slices with mustard.
Drape one slice of bread with lettuce and top with grated filling. 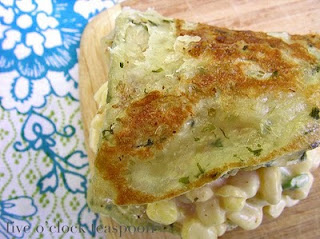 Note: You may substitute 1/2 cup fresh or frozen corn kernels for the carrot or zucchini.
Fresh or frozen roti (available at Asian grocery stores) is delicious in place of bread.
See photo above. 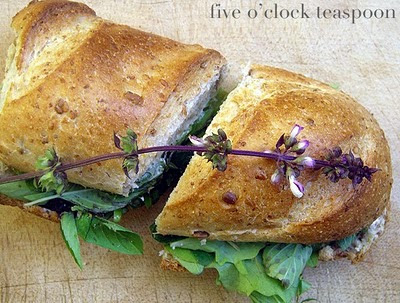 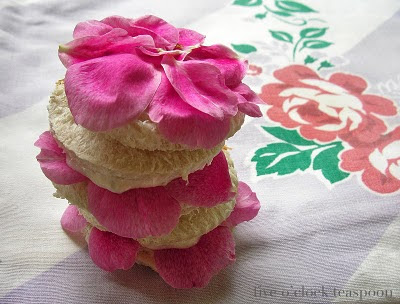 Rose Petal Sandwich
adapted from The Art of Cooking with Roses (1968) by Jean Gordon
For tea sandwiches you will need:
5-7 slices of high-quality white bread, such as Japanese white bread or brioche
6 oz. cream cheese or butter, softened and whipped with a fork
1 Tbs snipped chives
1/2 cup rose petals
Cut out bread using using a 3" round cookie cutter.
Spread with cream cheese or butter and sprinkle with chives.
Decorate with rose petals radiating from center. Repeat with one or more layers.
Suggested reading:
Pennell, Elizabeth Robins. The Delights of Delicate Eating. Chicago: University of Illinois Press, 2000.
Andrew F. Smith. "Sandwiches," The Oxford Encyclopedia of Food and Drink in America. Ed. Gordon Campbell. Oxford University Press, 2003.

Sandwiches Part I
Posted by the five o'clock teaspoon :: fiveoclockteaspoon.com at August 25, 2010 3 comments: 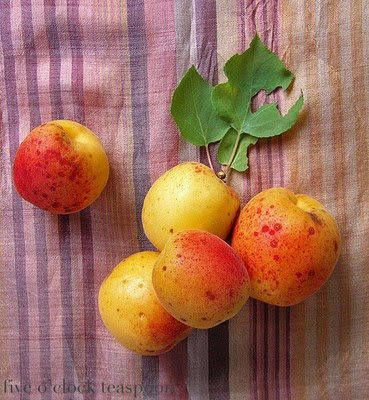 Stone fruit trees are a dramatic presence in the garden, yielding delicate blossoms in the spring and gem-like fruit in the summer. Even in winter stone fruit trees retain a striking form, their dark, gnarled branches seen against a chilling grey sky. Between late January through March, small branches may be cut and brought indoors to force blooming, creating an unexpected wintertime floral display. 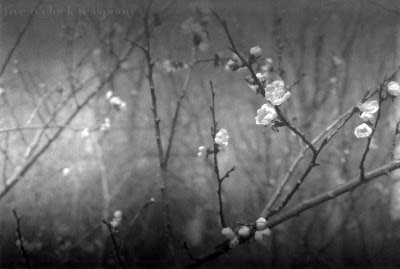 Apricot blossoms in early spring
During spring bloom time, stone fruit flowers such as cherry blossoms may be pickled or crystallized to make enchanting edible garnishes. Even the leaves of some trees may be used for cooking. In Provence, peach leaves infuse custard with a subtle yet distinct aroma of almonds and anise. Simply add 1 or 2 peach leaves to the pot as the custard cooks and serve alone or as a crème anglaise- a fitting accompaniment for a peach pie or tart. 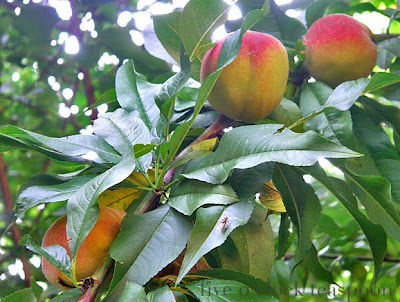 Peaches growing on a columnar fruit tree.
Whether in an orchard of standard or dwarf-size summer bearers such as peach, plum, and apricot, or a small potted nectarine on a balcony, stone fruit trees will do well in almost any sunny location with minimum fuss. There are many varieties to choose from that are suitable for outdoor spaces of all sizes. 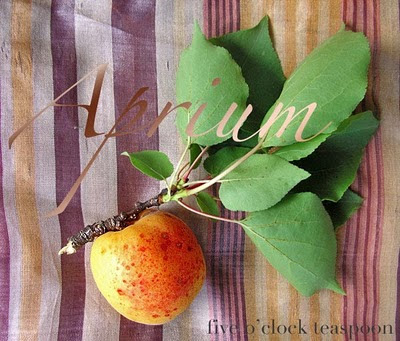 One of my favorite varieties is a hybrid known as the aprium, a genetic graft of 3/4 apricot and 1/4 plum. The unique fruit has the appearance of an apricot and features the apricot's buttery texture and mellow, sweet-tart character with a hint of the plum's ambrosial fragrance. 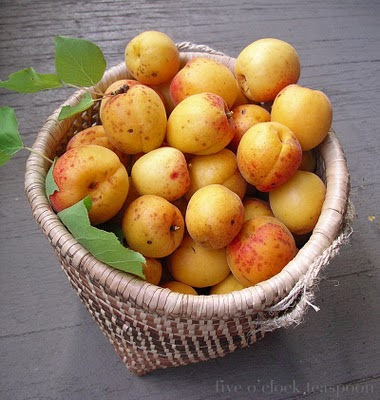 Aprium fruit picked in late June
Planting several kinds of stone fruit trees will yield a continual harvest throughout the summer. I had a wonderful crop of apricots and apriums in June, pluots and Japanese and Italian plums in July, and peaches in August. Because there is so much fruit, ripening at different times, I like to use some to make an impromptu fruit dessert, such as a tart or cobbler, and use the rest for jam and chutney. Of course, one of the greatest pleasures of picking your own fruit is eating it fresh off the stem, still warm from the sun. 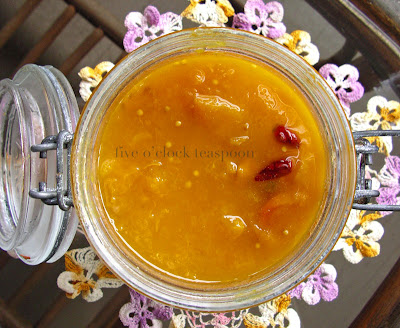 Combine all ingredients except fruit in a large nonreactive pot and bring to the boil. Add fruit, and cook at a high simmer for about 20 minutes, or until syrupy. Remove cinnamon, chilies, and clove. Pour into jars and refrigerate for up to 1 month. 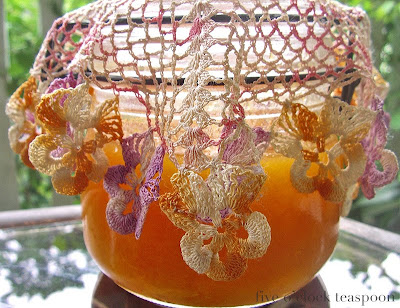 Recipe
Stone Fruit Conserve
Ingredients
1 lb. stone fruit such as plums, nectarines, cherries, apricots, and peeled peaches, sliced
2 cups granulated sugar
juice of 1 lemon
Place fruit in a large nonreactive bowl with sugar and mash together. Stir in lemon juice and allow the mixture to macerate for 15 minutes. Transfer mixture to a large nonreactive pot and bring to the boil. Reduce heat and simmer gently for 10-20 minutes, or until thick and syrupy. (Note: a longer heating time will produce a thicker consistency. Keep in mind that the conserve will firm up more when in the refrigerator.) Pour into jars and refrigerate up to 1 month.
The conserve is excellent with eggs, pancakes, toast, or simply mixed into creamy yogurt. 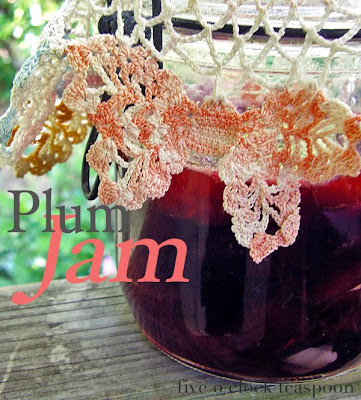