Here is a lovely pancake recipe that combines the flavor of coconut with sweet curry powder. For an even stronger coconut element, substitute lite coconut milk for the milk in the recipe. 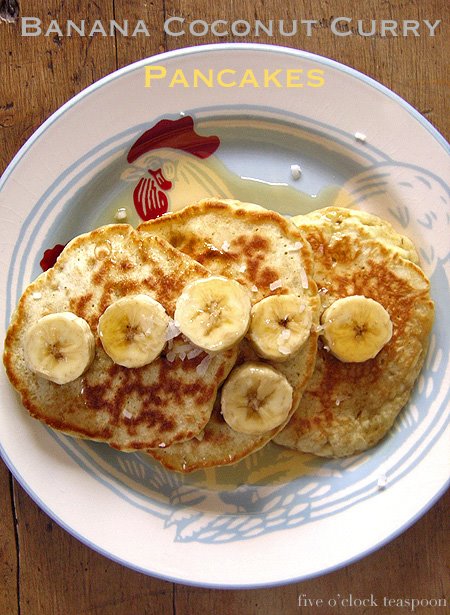 1. Dice 1 1/2 bananas. Cut remaining 1 1/2 bananas into rounds to serve on top.
2. Beat eggs, butter, and milk in a large bowl. In a small bowl, mix flour, coconut, salt, and baking powder. Add flour mixture to egg mixture. Whisk in curry powder and diced bananas.
3. Heat a large pan and coat with a thin layer of butter. Add 1 Tbs of oil. The butter separates the oil from the pan, helping the pancakes brown evenly. Repeat this process after each batch of pancakes, or as necessary.
2. Add batter to pan, using about 1/4 cup of batter for each pancake. When pancakes begin to brown flip and cook until golden. Place cooked pancakes on a heatproof plate in a warm oven.
4. Serve with sliced banana and fresh or sweetened dried coconut shavings and maple syrup, if desired. 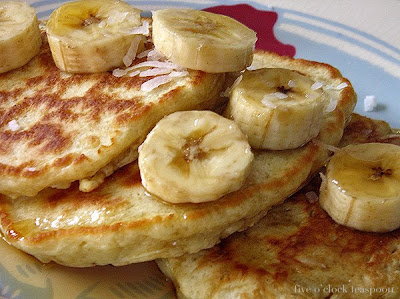 Posted by the five o'clock teaspoon :: fiveoclockteaspoon.com at January 29, 2009 1 comment: 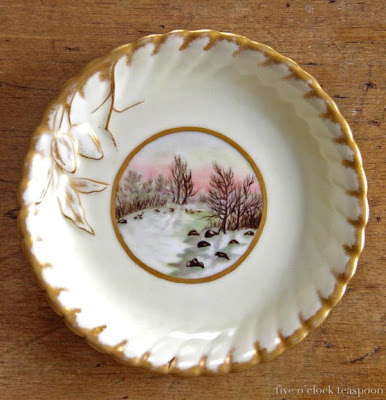 A miniature Limoges plate painted with a winter landscape, ca.1882-1890.

One of the redeeming qualities of Winter is that it makes drinking a cup of hot chocolate especially enjoyable. Hot chocolate, which might be too heavy in other seasons, is as welcome as a warm blanket in the winter months. A cup of rich Viennese hot chocolate with whipped cream is often better than dessert. Yet I sometimes prefer a less intense version when I'm at home and so will replace cow's milk with vanilla soymilk for a lighter, but still creamy option.

Chocolate combines well with other flavors and so hot chocolate is a perfect base for inventive confections. I have used peanut butter here but one could get much more experimental, with ingredients like sesame, black pepper, curry powder, etc. I've tried many different kinds and forms of chocolate with varying success. For the recipe below I have chosen cacao powder as it is easy to find and yields a quick cup. 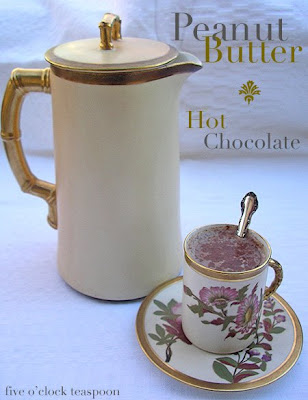 If you have some extra canned pumpkin puree, try mixing a Tbs with the peanut butter before adding it to the milk.

1. Heat milk on stove until steaming. Whisk in cacao powder and sugar. Taste and add more sugar or cacao to your liking.
2. Whisk in peanut butter.
3. Pour into a mug and top with a dash of allspice.
Posted by the five o'clock teaspoon :: fiveoclockteaspoon.com at January 21, 2009 1 comment:

Congee: A Dish of Propriety 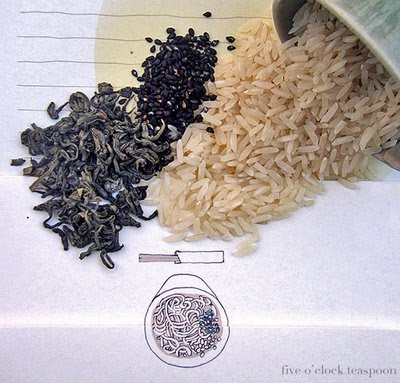 By definition, the English word "congee" describes porridge of an Asian background. The word is an Anglicized form of the Tamil kanji, a kind of rice gruel. Congee is thus distinguished from cereal based porridge. Rice porridge is found throughout Asia. It is commonly served to the infirm as it is easily digestible. Yet, anyone can enjoy it as a tasty meal throughout the day. Recipes of the Jaffna Tamils includes a reminiscence about eating a tea time meal of puli kanji (tamarind kanji) at home with one's family, as the monsoon rains soaked the world outside (Nesa Eliezer, ed. Recipes of the Jaffna Tamils Hyderabad, India: Orient Longman, 2003).

Historically, congee has served a more significant role as a ritual food, correlating with ritual fasting. A thin gruel was a suitable choice for acclimating the body to food, while providing concentrated nutrients. According to Ammini Ramachandran on peppertrail.com, in Kerala, kanji was often eaten on every new moon, a time of ancestral prayer. This was in accordance with beliefs that linked fasting or eating simple foods like congee, with spiritual ascension.

In China, the link between congee and ritual may be traced back to the 1st Century BCE and possibly earlier. The Chinese word 粥 zhou is mentioned in the Li Ji (Record of Rites) compiled by Dai the Younger in the 1st Century CE as the first food served to family members after fasting due to the death of a parent (H.T. Huang, Science and Civilisation in China, v. VI: 5 Cambridge: Cambridge University Press, 2000, 82). Many other ancient texts treat congee in this context. Such references in the works of the 4th Century philosopher, Mencius, may be viewed in bilingual format on The Chinese Text Project. The Shiliao bencao, a Materia Dietetica from 670 CE discussed the use of green tea as a broth for congee, thus enhancing the gruel with the medicinal properties green tea was valued for at that time (Science and Civilisation, v. VI: 5, 555).

Because of its simplicity and associations with ritual and religious rites, congee has long been a symbol of deference to the proprieties of moral behavior, satisfying both physical and spiritual needs.

I have included two recipes for Chinese style congee. Of course I am generalizing, as the dish varies greatly throughout China.


1. Bring water to boil in a large pot. Add tea in bag and rice and reduce to a simmer.
2. Remove teabag after 7-10 minutes.
3. Continue to cook until the rice is replete with water and a porridge-like consistency is reached, about 40 minutes. Season with salt and serve.

For a sweet alternative, add some grated ginger and sugar or honey.

Ginger Garlic Congee
This dish is excellent for staving off or treating a cold.
Serves 2-4

1. Heat oil in a pot and add garlic and ginger. As they begin to release their aroma, add the rice and give it all a stir.
2. Add the vegetable broth or water, stir and cook until the rice is replete with water and a porridge-like consitency is reached, about 40 minutes. Season with salt or soy sauce and pepper, spoon into bowls and add toppings.
Posted by the five o'clock teaspoon :: fiveoclockteaspoon.com at January 09, 2009 4 comments: