While the picnic is an immemorial custom all over the world, convened to celebrate a beautiful day outdoors, the most exciting advancement in picnicking may have been the introduction of the motor car in the early 20th century. For those who could afford one, a car increased the element of spontaneity and luxury in picnic travel, allowing picnickers to travel easily and comfortably to picturesque countryside spots with a good meal in tow. Picnic culture thrived in England in the 1930s, with British manufacturers such as Brexton producing affordable, stylish wicker hampers featuring porcelain or lightweight plastic plates and cups, metal thermoses, plastic food storage containers, and stainless steel utensils.


The new convenience of picnic travel expanded the possibilities of the types of dishes that could be brought to a picnic and paved the way for cookbooks such as Hilda Leyel's Picnics for Motorists, a delightful collection of simple yet imaginative recipes, published in 1936 by Routledge as part of The Lure of Cookery series. 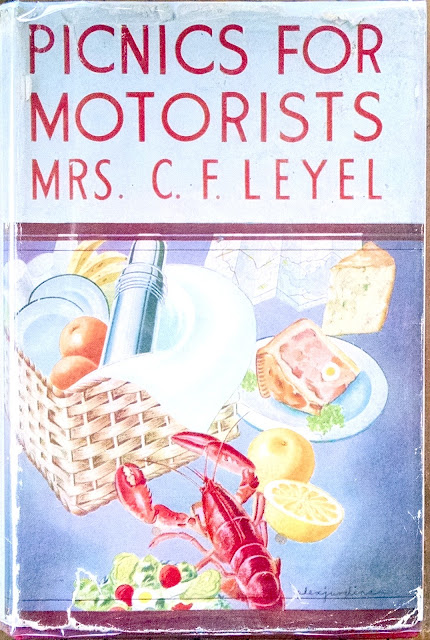 In Picnics for Motorists Leyel picks up on the theme of cooking for modern, busy households which she addressed 10 years earlier in Cold Savory Meals. Cold dishes, she felt, were ideally suited to modern life, but required significant planning to come out right. As Leyel says, "The art of arranging cold meals is to choose dishes that are better cold than they would be hot." Since few cookbooks of the period included recipes for cold meals, these books were intended to aid the home cook in choosing the best dishes. Leyel provides 60 picnic menus in Picnics for Motorists. Most of the recipes are included in the book but Leyel cleverly ties into her other publications by featuring dishes that could be found in her other books in the The Lure of Cookery series, such as Cakes of England.


To eat en plein air leads to the inevitable packing up and discarding of wrappings, soiled utensils, and leftover bits of food. Before the advent of trash bins, this could be a tricky maneuver. After describing the sort of disposable paper plates to use, Leyel ends her preface with a curious method of waste management: "The soiled papers are easily disposed of in some ditch, buried in the ground, and the knives are cleaned by being dug into the grass. In this way nothing is left to annoy the next comer or the generous owners of the property."

I later found a similar description in the novel Starlight (1967) by British author Stella Gibbons. Gibbons opens the picnic scene after the characters have already eaten the food, instead choosing to focus on the idyllic countryside setting: "Peggy and Arnold Corbett were sitting after lunch in a birch coppice, surrounded by primroses."

When the characters decide to leave, Gibbons uses the moment to reveal another shade of Peggy's character:


"Peggy made him wait while she gathered up the smallest fragments of eggshell and paper and, amid his jeers, buried them under leaf-mould and moss. He watched her with the mocking smile that the slightest sign of gentleness in her always brought to his face. 'What's the point? Who the hell's going to see a bit of litter in here?'
'Nobody. If I can help it.' She wiped the moist earth off her hands and they went to the car."

For Hilda Leyel and Stella Gibbons' character, Peggy, enjoying the landscape implied a duty to preserving it. As Leyel says, "It is very distressing to see the countryside disfigured sometimes by paper bags and empty bottles and it spoils the enjoyment of all those to whom a picnic in the open air is a very real pleasure." 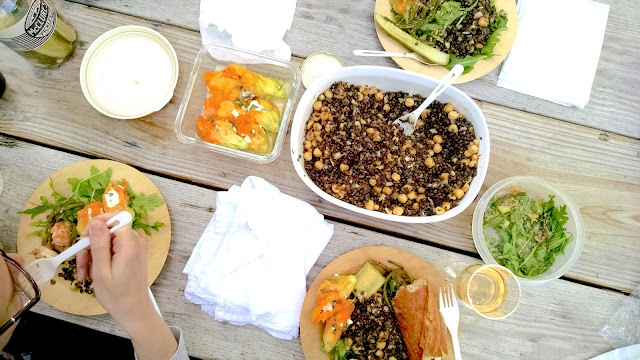 One of these days I plan to make an entire picnic menu from Picnics for Motorists. (Perhaps it will include the shrimp pie; asparagus in French roles; tomato, coconut and olive salad; and banana ice cream.) But what I love most about a picnic is putting together a few lovely dishes on a whim and then rushing out to enjoy the day. In that spirit, here are some dishes from a recent picnic dinner (arrived at by motor car) featuring lentil salad with toasted hazelnuts, squash blossoms filled with mozzarella, an arugula salad, baguette, pickles, and prosecco. 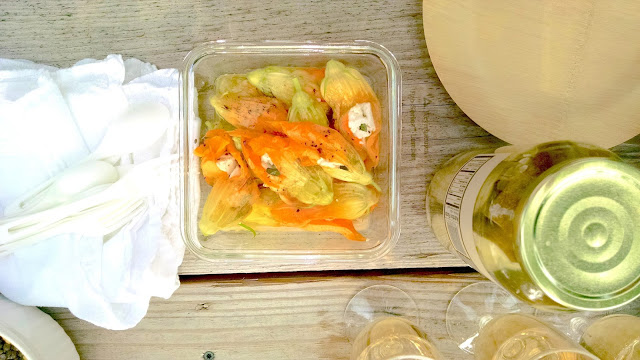 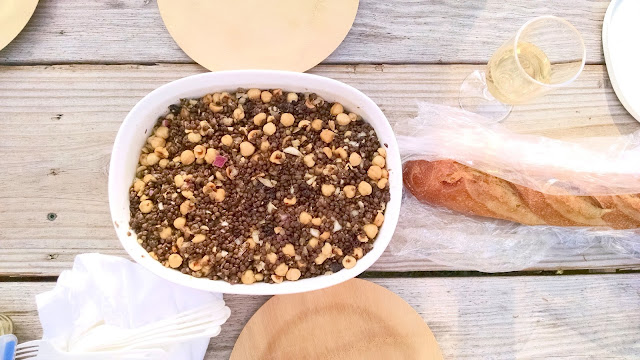 The Best Lentil Salad Ever from My New Roots 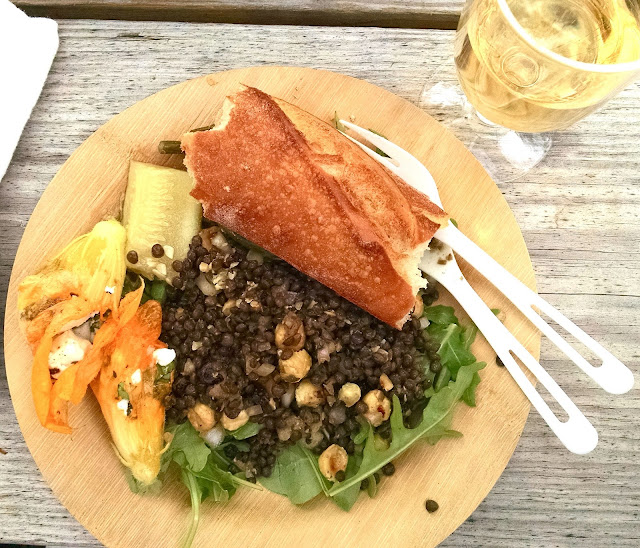 For more on Hilda Leyel's cookbooks, read this post on Cold Savory Meals, the recipes of which are perfectly picnic worthy, and my post on cooking with snow, which discusses Leyel's book, Puddings.

More on picnics: Picquant Cucumbers and an Early Autumn Picnic

Posted by the five o'clock teaspoon :: fiveoclockteaspoon.com at August 25, 2015