Celebrating Food and the World's Fair

The images in this post are from a set of commemorative postcards issued to promote the 1939 World's Fair, held in Flushing Meadow Park in New York City.

From street festivals and village fêtes to county carnivals, fairs have historically functioned as sites of both commercial and cultural exchange. Going to a fair represents a break from the quotidian-- a chance to experience something new and unexpected. Food, in the form of old favorites and new discoveries, is invariably part of the entertainment. Perhaps no fair has existed on a grander scale than the World's Fair. Beginning with London's Crystal Palace Exposition in 1851, in which 28 countries exhibited in pavilions, the World's Fair has been a stage for the performance of national identity through art and industry. This year's World Expo in Shanghai, which opened on May 1st, is no exception, with nearly 200 countries participating and a projected audience of 70-100 million. 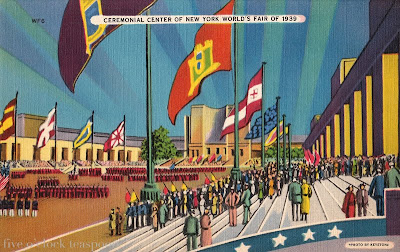 Postcard from the 1939 World's Fair in New York, depicting the "Plaza of Governments."

The history of the World's Fair is very well documented and there is a large amount of archival material on the subject, including pamphlets, menus, and design plans. It is particularly interesting to consider the role of food and cuisine as a demonstration of national identity at these events. For instance, at Expo 67, held in Montreal to commemorate Canada's centennial anniversary, indigenous Canadian food was employed to illustrate and define Canada's cultural identity. The pavilion's restaurant, La Toundra, was decorated with line drawings of indigenous life and featured dishes of meat and fish particular to Canadian land and waters. An enlightening study on the subject can be found in "The Cuisine of the Tundra: Towards a Canadian Food Culture at Expo 67," by Rhona Richman Kenneally in Food, Culture & Society, vol.2 (3), 2008: 287-314. 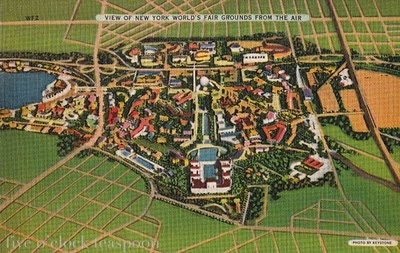 Model of fairgrounds, previewed to the public at the Empire State Building.

Indeed, one can begin to trace the experience of the World's Fair through the period literature on the subject. The Columbian Exposition, held in Chicago in 1893, was the subject of a charity cookery book compiled by Carrie V. Shuman titled, Favorite Dishes. A Columbian Autograph Souvenir Cookery Book. Over Three Hundred Autograph Recipes, and Twenty-three Portraits, Contributed By The Board Of Lady Managers Of The World's Columbian Exposition, published to raise admission funds for women who could not afford to attend the fair. Produced by the Columbian Exposition's Board of Lady Managers, a group of influential society women from 7 different states, the cookbook reflects the interests behind the fair's Woman's Building, which featured exhibits on women's achievements and a library of women's writing. At a time when women's rights was a commonly contested issue, the building's presence represents an attempt to situate the role of women within discourses on the nation. The cookbook, with its collection of regional favorites, attempts to bring together the experiences and allegiances of women across the United States through food. In an introductory piece Shuman decribes the collection as "the exponents of the Art of Cookery, at this stage of its best development in this country, and as cheerful assistants of women who need the encouragement and blessings of their more fortunate sisters." As a side note, the book's first chapter, "Tea," includes recommendations for serving "Five O'clock Tea" with a "teaball," as it is a convenient tool for the busy hostess and allows for an economical use of tea leaves. 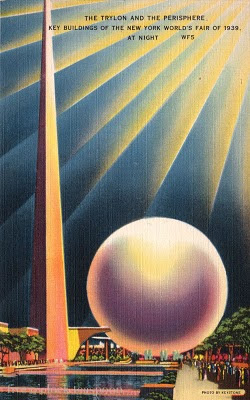 Postcard from the 1939 World's Fair in New York, depicting a night view of the fair's signature monument, the Trylon and Perisphere.

The World's Fair attempts to portray, not just the character of individual nations and corporations, but a view of the world through dominant political and economic paradigms. The Fair was, and continues to be, a projection of the future as reflected through capitalist ventures. The 1939 World's Fair was themed "The World of Tomorrow" and featured a futuristic display of modern technology, culminating in the Trylon and Perisphere buildings (above), a monument to human ingenuity through industrial and scientific development, as the Second World War approached. While the preparation of food was reconsidered in exhibits featuring electric kitchen tools, the appearance of food itself could symbolize the future. For instance, the Sealtest Dairy pavilion pamphlet featured recipes for orbs of fried macaroni and cheese, an American classic reinvented as a futuristic spheroid. 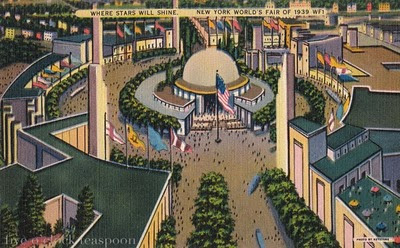 Postcard from the 1939 World's Fair in New York, depicting the fair's Planetarium, a technological achievement in which "intricate machinery moves the heavens at will."

One can experience a culture through its cuisine. By consuming the exotic delicacies at the World's Fair, audiences came into contact with a romantic, fantasy image of foreign cultures and societies. Yet food can also stand as an embodiment of what seems 'foreign' about another culture. But cultural convergence can be unsettling, particularly if there are socio-political inequalities involved. This idea is illustrated in a 1936 Japanese novel by Yumeno Kyusaku, titled Ningen soseji, or Human Sausages. In this story, after a series of fantastical events a Japanese carpenter is plunged into the 1904 World's Fair in St. Louis, Missouri, where he comes into contact with an American gangster trafficking in Asian women in a secret hideaway on the fairgrounds. Most frighteningly, the man discovers the gangster's personal sausage machine (a Western food product), into which humans have been fed. (See Tomoko Aoyama, Reading Food in Modern Japanese Literature, Honolulu: University of Hawai'i Press, 2009, for more analysis on this subject.) In this fantastic tale, technology is represented by a machine of annihilation, allowing the foreign West to consume the East through an act of anthropophagy. 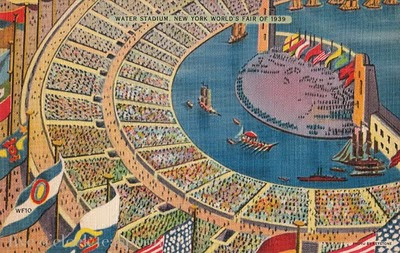 Postcard from the 1939 World's Fair in New York, depicting the marine amphitheater.


A fortuitous occurrence at the St. Louis World's Fair led to the invention of iced tea at the East Asian Pavilion (Hohenegger, Beatrice, Liquid Jade: the Story of Tea from East to West, NY: St. Martin's Press, 2006). As the St. Louis summer heat turned visitors away from the pavilion's tea samples, the exhibitor, Richard Blechynden, added ice to the tea, creating a new and popular beverage. I think this story sums up the notion of the World's Fair quite well, as a global marketplace generating consumerism and conspicuous consumption through the ideologies put forth by the self-declared tastemakers of the day. 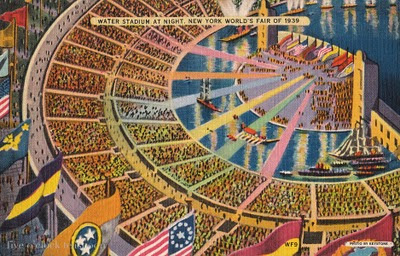 Postcard from the 1939 World's Fair in New York, depicting the marine amphitheater at night.

Posted by the five o'clock teaspoon :: fiveoclockteaspoon.com at May 10, 2010

Email ThisBlogThis!Share to TwitterShare to FacebookShare to Pinterest
Categories: Exhibitions

Fascinating! I'm intrigued by the idea of the women's movement in the World's Fair as a way to raise feminist consciousness through food - do you think this was a class-based issue? Did working class women become involved in these projects?

Marvelous post. I attended the 1964 World's Fair in
NYC several times with my whole family and with
friends. I particularly remember the Japanese pavilion
and its delicious food. They were promoting Kikkoman Soy Sauce at the time. My older
relatives told many tales of the 1939 World's Fair and
the interesting jobs they each had there at the end of
the Great Depression.

Patience,
Both the Columbian Exposition's Board of Lady Managers, and the women who were asked to contribute to the cookbook were of elite social standing. Their vision of the Woman's Building and the cookbook was, I think, to offer information that would be helpful to less privileged women. In this way they could activate a broader cross section of society for the suffrage movement.
There's more information with additional links at Harvard's Library Collection site "Working Women, 1800-1930."

Mavis,
I'm happy you liked the post, particularly as you attended the fair and were able to experience the food offerings there. It sounds like a memorable experience!

I've always been intrigued by the World's Fairs - more so now as we have a building here in SF that is one of the remnants of when the Worlds Fair was held here, and when I really concentrate I can image what an incredible venue and experience it must have been.

Thanks so much for pulling together the history and perspective - this post was a great read.

OysterCulture,
So much effort went into the pavilion buildings and it's great to see some of them still standing, whether they may be recycled for a new purpose or preserved as a piece of history. I'm really glad you enjoyed the post!