Rhubarb: A May Vegetable 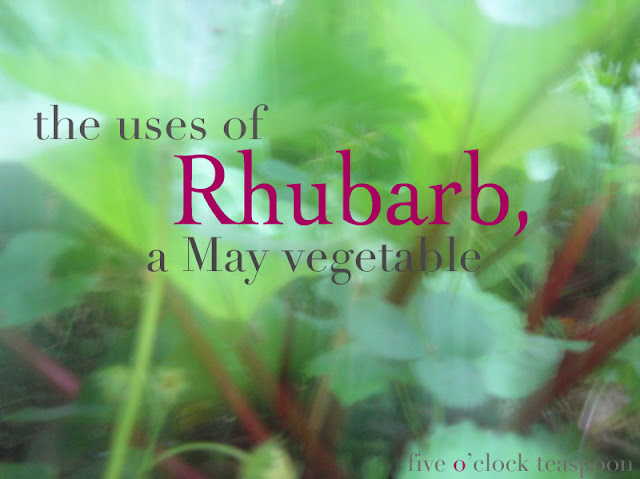 Although common cultivated rhubarb is a vegetable from the Polygonaceae family (of which sorrel is also a member), the ruby toned stalks are mostly used in dessert recipes. Besides imparting its lovely hue, rhubarb's tart juices meld nicely with sugar. 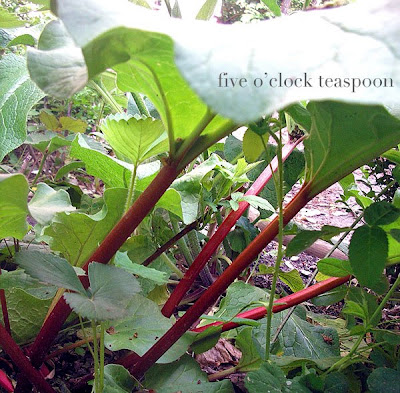 Rhubarb, a cool-climate perennial, starts to appear in March and reaches its peak around May to June. While rhubarb is often grown in vegetable gardens, I prefer to plant rhubarb throughout my garden, wherever there is an opening amidst other low, sun-loving perennials and herbs, ensuring a bountiful crop. While the poisonous leaves are inedible, the plant's attractive appearance makes it a lovely choice for many locations (until the stalks are picked, of course). 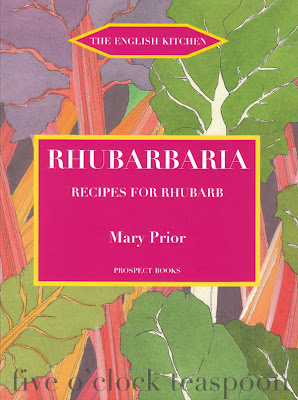 While at Kitchen Arts and Letters in New York, one of my favorite bookstores, I found Mary Prior's Rhubarbaria: Recipes for Rhubarb, a brief but thorough collection of rhubarb recipes from early and modern cookbooks. From Prospect Books' "The English Kitchen" series, Rhubarbaria begins with "Rhubarb in Britain," a 24-page micro history that traces rhubarb's journey from China to the British kitchen through early modern cookbooks, botanical, and travel writings. The following chapters feature rhubarb in a variety of recipes; one chapter is titled, "Rhubarb as a Vegetable" and Prior includes many savory recipes, such as the Afghan Sabzi Rahwash: Spinach with Rhubarb and Dill. Some of the best recipes that combine ingredients from the garden are found in Chapter 4, "Rhubarb Soups." I think either Rhubarb, Ginger and Mint Soup, or Chilled Rhubarb, Ginger and Elderflower Soup would be perfect for a summer meal. Sweeter versions could be served as a dessert, such as Hungarian Sweet Rhubarb Soup, made with sour cream, or this pretty Danish Cold Rhubarb Soup. 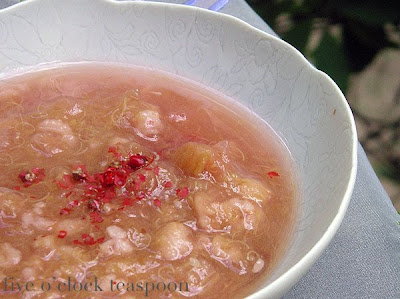 Cold rhubarb soup from Rhubarbaria, made with porridge oats and vanilla. 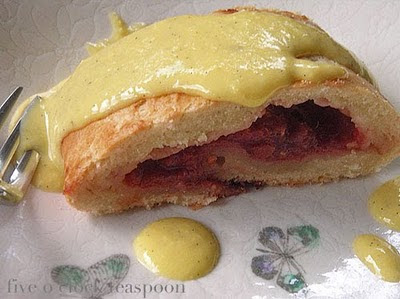 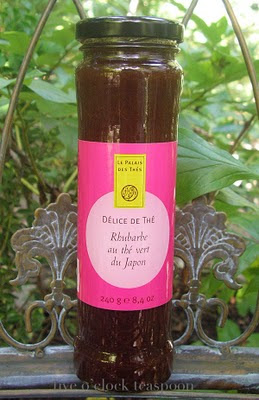 In dessert recipes, rhubarb is almost always cooked with sugar until it breaks down to a jam-like consistency. When rhubarb is not in season, simply substitute a good quality rhubarb jam for the fresh stalks. There are usually several enticing combinations to choose from such as strawberry-rhubarb, raspberry-rhubarb, or this rhubarb and green tea jam, from Le Palais des Thés. I recommend using the jam in a Bakewell Tart, a fruit and lemon curd filled cakey-pie topped with almonds, a riff on the British pudding. 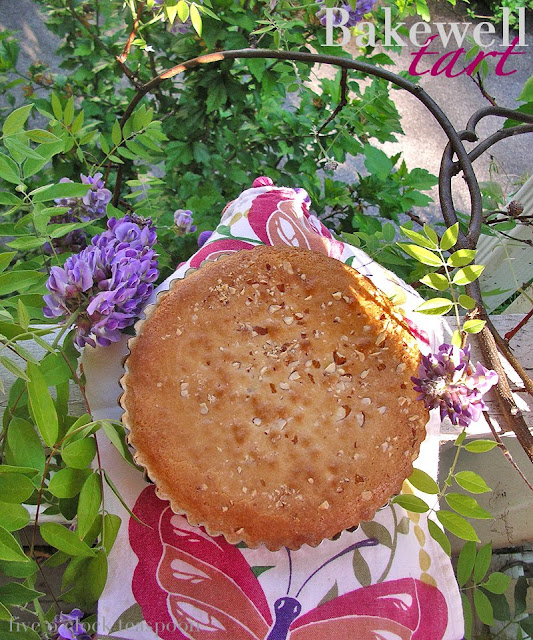 Ingredients
(for a 9" tart pan)

your favorite tart or pie dough

1. Preheat oven to 375ºF. Roll out chilled pie dough and line base of tart pan. Bake blind with pie weights for 10 minutes. Remove from oven and cool. Meanwhile in a large bowl mix together butter, sugar, salt, lemon zest, and eggs. Add flour and almond meal and mix well.

3. Bake for 30 minutes or until browned on top. Check on the tart periodically. If the top begins to get too brown, cover with aluminum foil for the remainder of baking time. 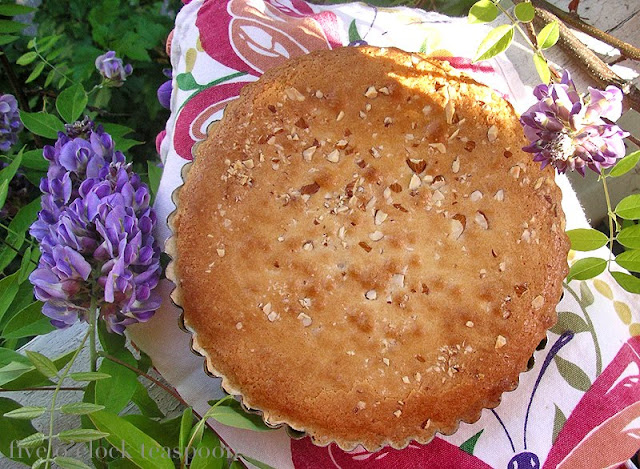 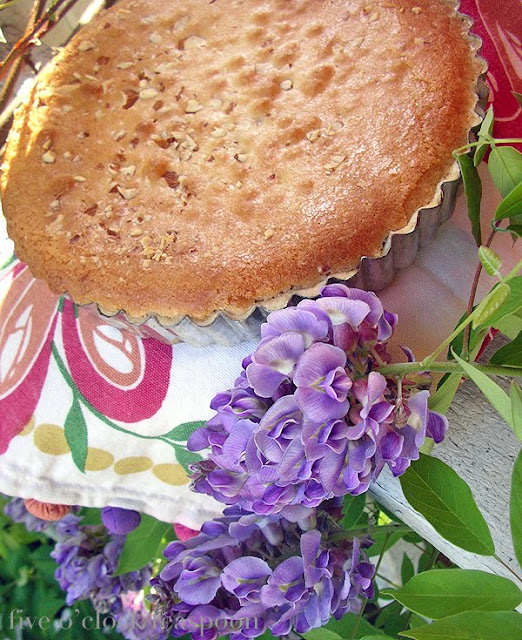 Kitchen Arts & Letters is an independent bookstore specializing in literature on food and culinary culture and carries over 13,000 thoughtfully chosen current and out of print titles.
1435 Lexington Avenue (between 93rd & 94th St)
New York, NY 10128-1625
(212) 876-5550
www.kitchenartsandletters.com
Posted by the five o'clock teaspoon :: fiveoclockteaspoon.com at May 31, 2010

I enjoyed reading this post, and wish that I had more sunny spots in my garden to interplant with rhubarb.
The recipes mentioned sound so summery and luscious. I plan to try and locate "Rhubarbaria" and
try them out as soon as I can.

I love rhubarb, but typically serve it as a sweet instead of a savory. Although, I've been seeing more savory dishes lately. The rhubarb green tea jamlooked amazing.

I've just been looking at a soup, compote, or sorbet recipe all possible from one recipe and made with blood orange juice, rhubarb, sugar, and lemon. I"m going to try the chilled soup served with fresh strawberry and mint leaves. I can't wait to try it.

sheree,
Sounds like a lovely combination and brilliant way to reuse the same base soup.