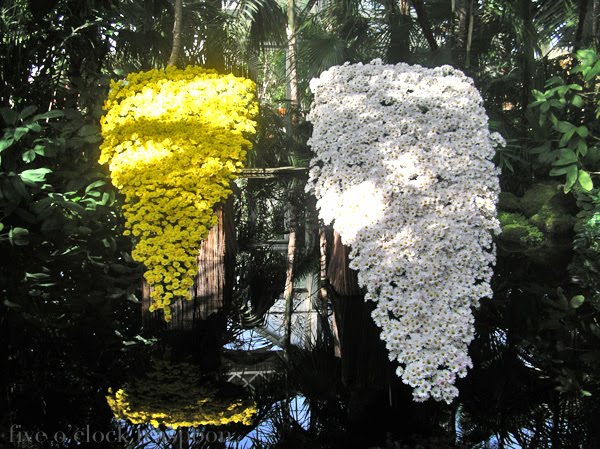 The New York Botanical Garden's third annual exhibition, Kiku: Art of the Japanese Chrysanthemum, is on view until November 15, 2009. See my post on last year's exhibit here. Although the NYBG does plan to hold future kiku exhibitions, the exhibit will not return next year. 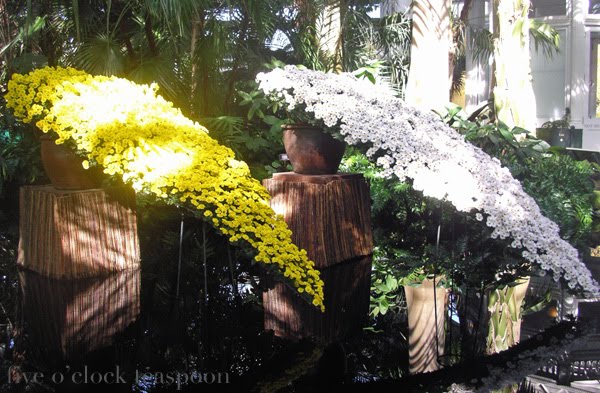 
This year, in addition to specimens from the exquisite Imperial style varieties displayed in 2008, the garden is showing examples of several other herbaceous chrysanthemums, many of which are pictured below. 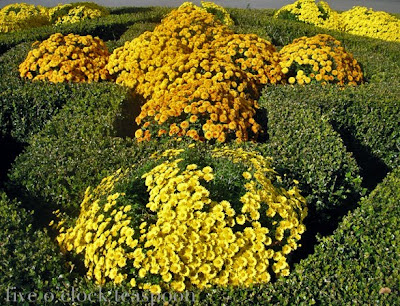 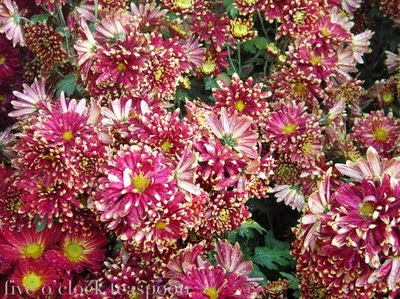 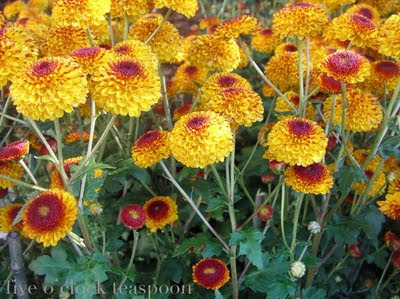 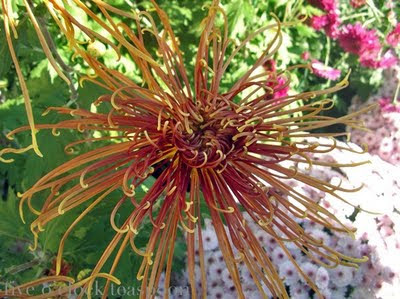 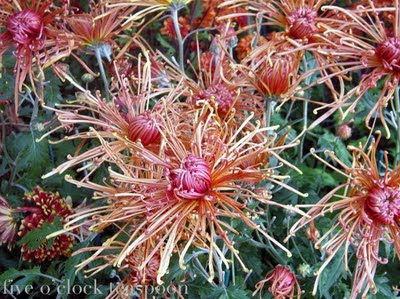 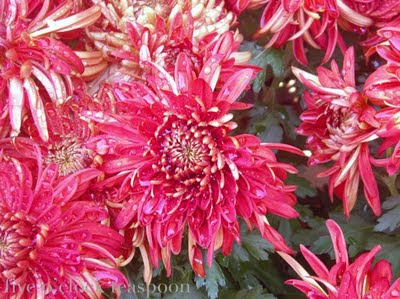 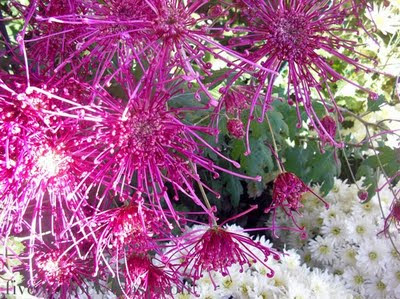 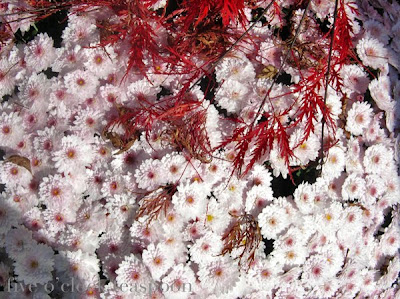 The Imperial style kiku are a visual paradox. From their upright form one senses a noble carriage conveying austerity, elegance, and refinement, yet the crowning profusion of petals suggests a controlled flashiness, at once self-effacing and florid. 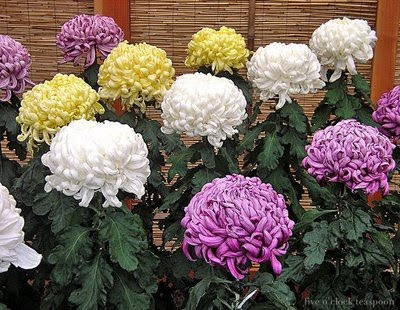 The Ogiku, or "Single Stem" style features a tri-color pattern of kiku. The combination of lavender, yellow, and white are associated with equine regalia of the Japanese court.

The more common chrysanthemum varieties are less flashy but radiate a similar feeling of subtle beauty. As I mentioned in last year's post, chrysanthemums are a common theme in Japanese literature. Kikugurama, (Boxcar of Chrysanthemums, 1967) a short story by illustrious novelist, Enchi Fumiko, alludes to the modest charm of the white chrysanthemum. In this story, a woman traveling home one early autumn evening finds herself on a local train carrying both passengers and freight. The long journey is protracted with frequent stops to pick up the night's cargo-- freshly picked chrysanthemums destined for the Tokyo flower market. At one stop the narrator observes a middle-aged woman accompanying her mentally handicapped husband as he sends off his beloved white chrysanthemums. Some time after the train leaves the station the narrator recognizes the couple as the Ishiges, whose strange marriage she had heard of before the Second World War. Apparently Mr Ishige had been born to a wealthy family. Worrying that his son's handicap would prevent his marriage, his father finds a willing young woman, Rie, to marry his son. The marriage elicited doubt and speculation from those who heard of the union. It was suspected that Rie had received financial incentives, but her quiet dedication and the love she showed for her husband over the years, despite humiliating events and a proposal from another man, proved her truly selfless nature. The narrator confides that she too had looked down on Rie. Seeing the Ishiges together after twenty years, the narrator realizes her mistake. Walking home from the train she recalls fondly:

I had been riding on a freight train full of chrysanthemums. In those dark, soot-covered cars hundreds and thousands of beautiful flowers were sleeping, in different shades of white, yellow, red, and purple, and in different shapes. Their fragrance was sealed in the cars. Tomorrow they would be in the Tokyo flower market and sold to florists who would display them in front of their shops.

At that moment she thinks of Rie and says, "She's a white chrysanthemum, that's what she is." Like the chrysanthemum, Rie was an enigma-- beautiful yet decorous and humble. The narrator concludes, "I felt a sense of joy in thinking of Rie's melancholy, middle-aged face as being somehow like the short, dense petals of a modest white chrysanthemum."

(This story can be found in Yukiko Tanaka and Elizabeth Hanson, trans. This Kind of Woman. New York: Perigee Books, 1982.) 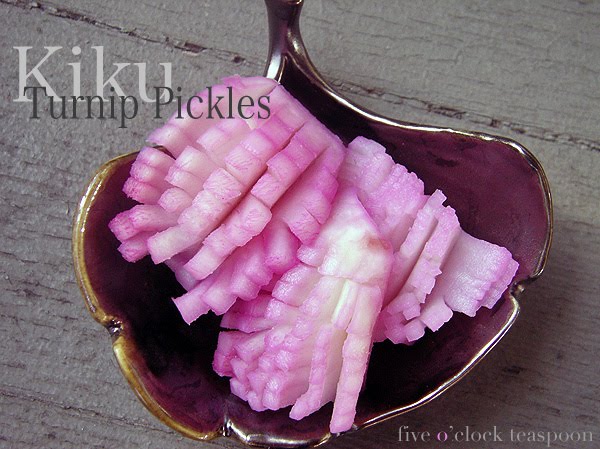 Recipe
Kiku Turnip Pickles
A reader recommended this tasty side dish in which turnip pieces are cut to resemble the petals of a chrysanthemum flower and then pickled with sweetened vinegar. I soaked the kiku in juice from concord grapes to achieve a pinkish hue. Red shiso leaves, soaked in water, would probably work too.

1. Take a turnip slice and score cross-hatch, or grid marks across the surface, about 2/3 into the slice. Repeat with remaining slices. Cut each slices into pieces that are approximately 1 to 1-1/2" square.

2. Cover the turnip pieces with just enough water to cover, mix in salt and soak for 15-20 minutes. You can add the coloring of your choice at this point or substitute plain water for colored water.

3. In a medium sized, non-reactive bowl or container, combine vinegar with an equal amount of water. Stir in sugar to dissolve.

5. Soak turnip pieces in vinegar mixture for 1 hour. When ready, pat each piece dry and carefully separate the "petals" so they resemble a bloom. Keep refrigerated up to 2 weeks. 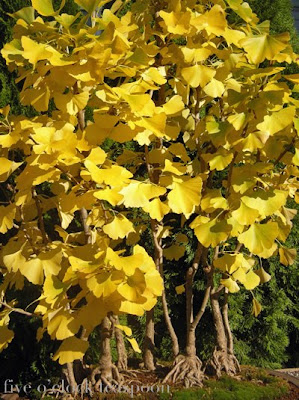 See highlights from the 2008 exhibition, Kiku: Art of the Japanese Chrysanthemum
Posted by the five o'clock teaspoon :: fiveoclockteaspoon.com at November 05, 2009

Those flowers are beautiful

Chrysanthemums are one of my favourite flowers.
I plant them everywhere in my garden amongst
flowers that bloom in spring and summer. I enjoy
their fragrance too especially after a rain. The NYBG
displays are simply wonderful.