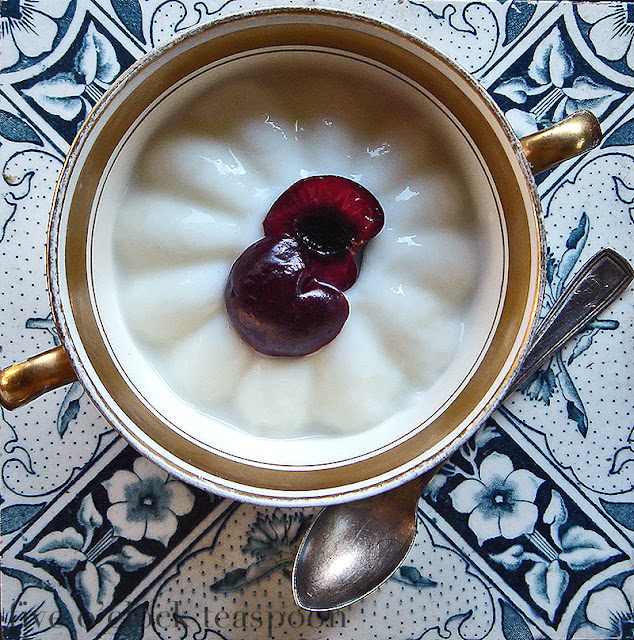 As promised in my post on the Cream Top Milk Separator, I've tested one of the recipes from the Cream Top booklet-- Vanilla Cornstarch Pudding. Also known as blancmange, this classic white dessert came to be known as vanilla pudding in the United States by the 1930s. The lovely and elegant blancmange was perfectly suited to the Depression era recipes of the Cream Top booklet and its pledge of "luxury without extravagance", as the only ingredients are milk, a small amount of sugar and salt, and cornstarch.  Instead of using cow's milk, I made the recipe with coconut milk. You could also try rice or almond milk, from which blancmange has long been prepared, or any other nut milk.  The cornstarch is used for firming and works wonderfully, without adulterating the taste of the pudding.  Although I haven't tried it, I'm sure arrowroot powder would work just as well.  Gelatin is often used in blancmange to create a densely moulded shape but I prefer the soft buoyancy yielded from cornstarch.  For a stiff mould, try using agar-agar instead of gelatin.  Blancmange is a very simple dessert and one of the most satisfying things to eat on a warm day because of its cold, slippery texture.  The taste is light and subtle, much like rice pudding without the rice, and therefore the perfect template on which to experiment, by adding flavors such as rosewater, saffron, and cardamom, or embedding ingredients such as edible flowers in the mould. 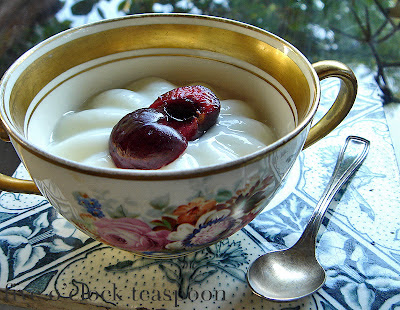 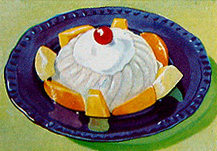 To prevent skin forming on surface of pudding while chilling, cover top of glasses or molds with wax or parchment paper, transparent cellulose sheeting or aluminum foil.

Posted by the five o'clock teaspoon :: fiveoclockteaspoon.com at July 03, 2012

I truly love pudding. This one sounds light and
summery. I'd like to try it with cardamom flavour
with maybe some rose petals on top. Or perhaps
marigold petals? The possibilities are charming to
contemplate!

Agatha,
Let me know if you try any of those flavors...if nothing else the flower petals will certainly look lovely.

I'm going to insist that you make this for me some time!

Also, I am going to London in October, so clearly I'll need to investigate the best places to eat blancmange before I depart.

Miss K,
How about I trade you blancmange for pie?