Chaikhana: The Teahouse in Central Asia 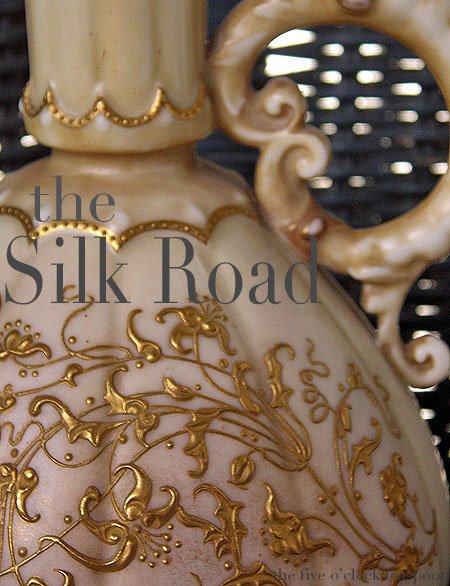 The Silk Road is defined by the group of land based trade routes along which goods (of which Chinese silk was a major commodity) were delivered between China, Western Asia and further west to the Mediterranean. From the 2nd Century BCE to the 16th Century CE, it was central to the distribution of goods around the world. To view some maps, visit The Silk Road Project and The Silk Road Foundation. It was along these roads through present day Syria, Iraq, Iran, Uzbekistan, Turkmenistan, Tajikistan, and Kazakhstan, that the chaikhana, a Pashto word meaning "tea room," came about.

Chinese accounts from the Tang Dynasty (618-907 CE), record that Western (i.e. Central Asian) traders frequented the teahouses in the Tang capital, Changan (Xian) upon their arrival to this trade destination (Edward H. Schafer, The Golden Peaches of Samarkand, Los Angeles: University of California Press, 1985, 20). In China, teahouses were well established in cities by the Northern Song period (960-1127) and tea was enjoyed by commoners and the elite. Although I have not found documentation that dates when tea was first served along the Silk Road, The Story of Tea, a Sufi story from the teachings of a 12th Century Sufi Master, Ayn al-Qozat Hamadani (d. 1140), refers to the chaikhana (Idries Shah, Tales of the Dervishes, New York: Penguin, 1993.). In the tale, tea serves as a metaphor for spiritual awakening and the chaikhana as a place to experience this awakening and thus acquire wisdom.

The chaikhana is still found in Central Asia, and serves an important social function. Like a village mosque, the local chaikhana is an institution. Men are the patrons of the chaikhana, and thus this public domain is actually quite exclusive. Although casual, its role is well defined. In addition to providing tea and sometimes food, the chaikhana functions as a meeting place for the exchange of news, gossip, and ideas (Rafis Abazov, Culture and Customs of the Central Asian Republics, Westport, CT: Greenwood Press, 2007).


In Afghanistan such tearooms are known as samawat, a term relating to the Russian samovar used to prepare tea. Located at road crossings and the entrance to villages, the samawat exists in relation to traders en route to the bazaar. In Popular Art in Afghanistan: Paintings on Trucks, Mosques, and Teahouses, Micheline Centlivres-Demont notes the absence of the samawat in towns without a market; travellers are instead offered refreshment and rest in guest houses. Centlivres-Demont presents a survey of the samawat she encountered while travelling in Afghanistan in 1975. While she observed a variety of teahouses, from modest to fancy, she describes Afghan teahouses as consisting of one or a few rooms with tamped earth floors and whitewashed walls often decorated with elaborate narrative painting or inexpensive lithographs of Indian film stars. Patrons drank imported Indian tea- green tea in warmer weather and black tea in colder weather- from bowls or glasses, and sat or reclined on a dais which could be moved outside in nice weather. Many teahouses have an attached outdoor area for travellers to tether their animals. The samawat is also seen by asphalt roads, catering to truck drivers. Such establishments were usually less decorative and often served more canned soda than tea.

As with the chaikhana, the samawat is often decorated with wall paintings. These are executed by itinerant artists and depict stylized images of scenes and symbols relevant to Afghan life including birds, flowers, vehicles, teapots and teacups, buildings, villages, roads, and weapons such as guns and axes. In the 1970s, Centlivres-Demont observes, many traditional teahouses in Kabul were demolished and replaced with newer buildings.


In the recipe below, airy layers of buttery puff pastry are seasoned with poppy seeds, acacia honey, and delicately pungent pink peppercorns. The puff pastry part is based on an excellent shortcut for palmiers that appeared in the Nov/Dec 2008 issue of Vegetarian Times. Although these cookies do not represent typical chaikhana offerings, they are somewhat related to the traditional layered dough recipes of Central Asian nomads. In the absence of ovens, these nomads may have devised the method of layering sheets of dough to create height when cooked over an open fire (Charles Perry, "The Taste for Layered Bread among the Nomadic Turks and the Central Asian Origins of Baklava, A Taste of Thyme, London: Tauris Parke, 2006.). 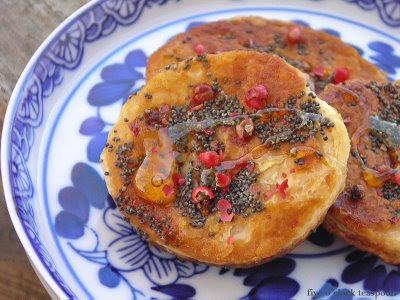 1. Preheat oven to 375ºF. Line baking sheet with parchment paper. Sprinkle half of sugar and half of poppy seeds on work surface. Place puff pastry sheet on top and sprinkle remaining sugar and poppy seeds evenly on it. Using a rolling pin, press sugar and seeds into pastry and roll out into an 11" square. Cut out 2" rounds with a cookie cutter. Or, cut diagonally into diamond shapes.

2. Put pastry on baking sheet and using your hands, crush 2 or 3 peppercorns over each cookie. Cover cookies with a sheet of parchment paper and another baking sheet. This will prevent the pastry from rising, allowing for compact, crispy cookies. Bake 15 minutes or until just turning golden. Remove top baking sheet and parchment and bake 5 minutes more. Remove from oven and cool. Drizzle with honey and serve with tea or coffee.

Photo information: The lead photograph shows a Royal Worcester Porcelain Ewer from England, ca. 1886. The gilt decoration depicting an arabesque motif was inspired by Islamic decorative aesthetics and reflects the taste for the "exotic" in Europe and America in the late 19th Century.
Posted by the five o'clock teaspoon :: fiveoclockteaspoon.com at February 20, 2009

This looks so beautiful, and your pictures are amazing.

Thank you for this fascinating view of the culinary
and social history of this part of of Asia. Your
photographs and recipes are stunning as well.