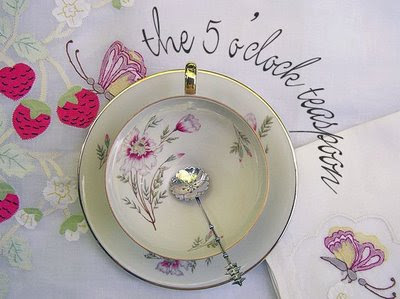 The study of food and culture is compelling because everyone experiences and interacts with some aspect of the food process, from cultivation to consumption. As a result, food is one the most potent means of communicating social and cultural identity.

I've named this blog after a piece of flatware that serves as a symbol for this concept. Distinguished from the average teaspoon by its diminuitive size, the five o'clock teaspoon was a requisite accoutrement for the afternoon tea ritual that became popular in Britain and America in the second half of the 19th century. Many other superfluous and specific table accessories of the time, such as grape scissors, moustache spoons, and strawberry forks, were articles of conspicuous consumption that reflected the owner's social status.

This blog is an exploration of culinary and garden arts, inspired by such objects of material culture. Topics range from the kitchen garden and arts of the table to historical and contemporary foodways and original recipes. Some upcoming highlights: Tibetan tea traditions, 'halwa' in both Indian and Jewish contexts, Chai Khana (Central Asian teahouses found along the Silk Road), and new variations on some old recipes.
Comments and discussion are welcome. 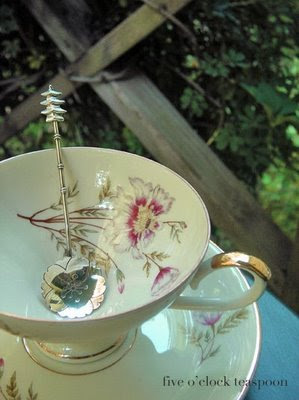 Posted by the five o'clock teaspoon :: fiveoclockteaspoon.com at July 22, 2008

The teacup and teaspoon in the photo are
simply gorgeous. I'm interested in the ways people
have used the garden setting for tea and other
meals throughout history.

I love afternoon tea. That is the most gorgeous tea cup and spoon ever! I just feel like sitting back and sipping a cuppa now. :)

Lovely idea for a blog...looking forward to following your intersections between food and the garden.