A person's eating habits can be a revealing reflection of character and lifestyle. Consider the rigidity of a man who orders the same meal at the same restaurant, on the same day of the week, every week for 10 years. For 10 years he does not engage in conversation while in the restaurant, except to place his order, and sits alone for the duration of the meal.  We understand him to be a man who does not like to deviate from what is planned and comfortable. Now imagine that this man suddenly comes to the restaurant on a different day of the week and orders a completely different meal from the menu, consisting of tomato soup, beefsteak and kidney pudding, and blackberry tart.  Given the man's idiosyncrasy, this would be very odd behavior. But he then resumes his regular habit of dining on a particular day and food.

If you were mystery writer Agatha Christie's great Belgian detective, Hercule Poirot, observing your fellow diner's departure from routine, you would find it more than curious. Indeed, you would be rather alarmed.   Add to this the discovery that a couple of weeks later, after visiting the restaurant on the expected day but again dining on an uncharacteristic meal featuring more blackberries, the man is found dead in his home.  Although the official verdict is accidental death, Poirot knows something wicked must be afoot.  Poirot's dining companion and fellow observer suggests that perhaps the man, now identified as Henry Gascoigne, was preoccupied with troubling news and thus ordered an unusual meal without thinking.  But as Poirot stresses, "a man who has got something on his mind will order automatically the dish he has ordered most often before."

And so begins "Four and Twenty Blackbirds," which Christie calls "the sorbet" in a collation of short mysteries published under the title The Adventure of the Christmas Pudding (1960).  In the introduction she writes, "This book of Christmas Fare may be described as 'The Chef's Selection.' I am the Chef!"  Like the royal chefs of Medieval England, who transformed banquet foods into unrecognizable, theatrics at table, Christie presents us with a scenario in which the mundaneness of food can be a murderer's dramatic undoing.  As in the nursery rhyme, "four and twenty blackbirds baked in a pie" was a dish--composed of live blackbirds--that graced elite tables.  Served as a between-courses sotelty, animals such as rabbits, frogs and birds were tucked between cooked pastry crust just before the pie was brought to the table.  Unsuspecting guests were then treated to a surprising kerfuffle when the crust was cut and the poor animals escaped and ran around the dining hall (Bober, P. 1999. Art, Culture, and Cuisine: Ancient and Medieval Gastronomy. Chicago: University of Chicago Press). Perhaps it was with such artful deception in mind that Christie titled this blackberry-infused story.

While a proper quotation menu from this delicious story would feature thick tomato soup, steak and kidney pudding and blackberry tart, or Gascoigne's second strange meal of mulligatawny soup, beefsteak pudding, blackberry and apple pie, and cheese, I offer you a delicate and easy to prepare blackberry clafouti. 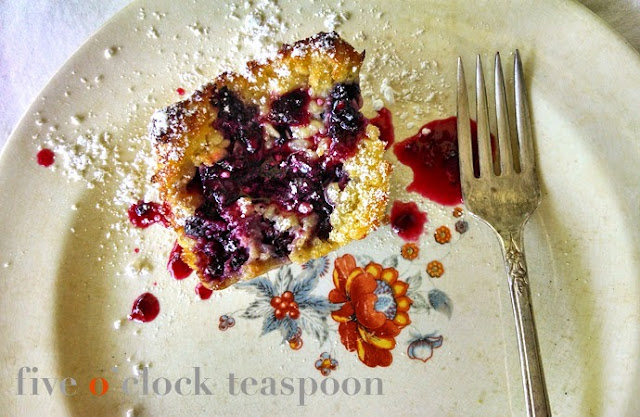 Serves 6
Batter:
3 eggs
1 cup whole milk
6 Tbs butter, melted
1 tsp vanilla extract
2/3 cup all-purpose or pastry flour
1/2 cup sugar
1/2 tsp salt
Filling:
1 Tbs butter
1 1/2 cups blackberries, cut in halves if large
1/2 cup sugar + 1 Tbs sugar
Confectioners' sugar, for serving
1. Preheat oven to 400°F and butter an 8" square tart dish or 6 individual ramekins.  Whisk together ingredients for the batter.  Lumps are fine and in this case enhance the clafouti, so let them remain.
2. To prepare the filling, melt butter in a skillet over medium-high heat.  Add blackberries, sugar, and cook until juices begin to extrude and blackberries appear glazed, about 5 minutes.
3. Pour half the batter in the tart dish or ramekins.  Arrange the blackberries over the batter, reserving the juices.  Cover with the remaining batter.  Sprinkle the remaining 1 Tbs sugar over the batter and bake for 25-30 minutes, or until golden and set in the middle.  To serve, drizzle with reserved juice and dust with confectioners' sugar. 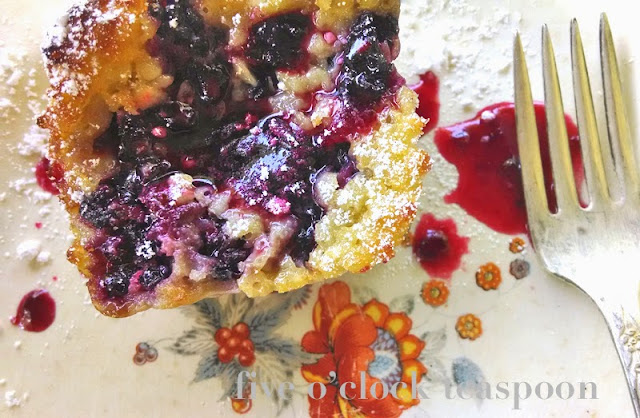 Sing a song of sixpence,
A pocket full of rye,
Four and twenty blackbirds
Baked in a pie.

When the pie was opened
The birds began to sing—
Wasn't that a dainty dish
To set before the king?

The king was in the counting-house
Counting out his money,
The queen was in the parlor
Eating bread and honey,

The maid was in the garden
Hanging out the clothes.
Along came a blackbird
And snipped off her nose.

I recently learned of this lovely book, in which photographer Dinah Fried recreates and photographs meals from literature, resulting in tantalizing quotation menus. http://www.fictitiousdishes.com

Read Quotation Menus, Parts I & II, then peruse the evocative tableaux in Fried's book and begin dreaming up some of your favorite fictional feasts.
Posted by the five o'clock teaspoon :: fiveoclockteaspoon.com at August 31, 2014