Unlike the cuisines of Continental countries such as France and Italy, English cookery shied away from mushrooms before the 20th century. In many cultures these potent products of the forest, which seem to arise spontaneously from moist earth and rotting wood, are believed to have wild, mystical properties capable of miraculous healing as well as effecting hallucinations and death.   A scene from Shakespeare's The Tempest, in which Prospero recounts his use of magic before finally renouncing it, casts mushrooms in an otherworldy light:

Ye elves of hills, brooks, standing lakes, and groves,
And ye that on the sands with printless foot
Do chase the ebbing Neptune and do fly him
When he comes back; you demi-puppets that
By moonshine do the green sour ringlets make,
Whereof the ewe not bites; and you whose pastime
Is to make midnight mushrooms, that rejoice
To hear the solemn curfew; (The Tempest, Act V, Scene I)

Despite the variety in form and color found in the fungal kingdom, a deadly species can look exactly like and grow in close proximity to a harmless, tasty one.  As Madge Lorwin notes in Dining with Shakespeare, Elizabethan cookbooks and dietary guides rarely mention mushrooms, unless the author was familiar with Continental cuisine.  In Castel of Helthe (1539) Thomas Elyot cautions, "Beware of musherons,..and al other thinges, whiche wyll sone putrifie."  In The Description of England (1577), clergyman William Harrison refers to them as "dangerous and hurtful."  Five hundred years later, a nice little chapter on fungi in Patience Gray and Primrose Boyd's European cookbook, Plats du Jour, attributes the rarity of mushrooms in the English diet to fear of poisoning as well as to the abundance of winter vegetables in England, making foraging unnecessary.  In countries where winter produce is scarce, they suggest, "everything provided by nature is put to some gastronomic use."  While this may not be an accurate conclusion (there are parts of England that see far fewer winter vegetables than parts of Italy where mushrooms are foraged), Gray and Boyd also note that fresh mushrooms were much more common in 19th century English markets than in the 1950s.  Mushroom gathering was not unheard of, however.  Elizabeth David writes about gathering mushrooms in England in the early morning with her sisters; their nanny would then cook the mushrooms over the nursery room fire (French Country Cooking, 1951).


Mushrooms and Murder in The Documents in the Case

With their potential for undetectable poison and their suspicious reputation in England, it is not surprising that the mushroom as weapon would make its way into a masterpiece of British mystery fiction. The Documents in the Case was written in 1930 by Dorothy Sayers, already well known for her mysteries featuring the aristocratic sleuth, Lord Peter Wimsey. In this novel, a man named Harrison is found dead in his rural vacation cabin, evidently poisoned by a mushroom stew made from mushrooms that he foraged and cooked himself.  It appears to be an open and shut case of personal negligence, with Harrison mistaking the deadly amanita muscaria for the benign amanita rubescens. The coroner wraps up the evidence with a warning of "the danger of experimenting in unusual articles of diet. It was notorious, he said, that other nations, such as the French, were accustomed to eat many natural products, such as frogs, snails, dandelions and various kinds of fungi, which in this country were considered unfit for human food." 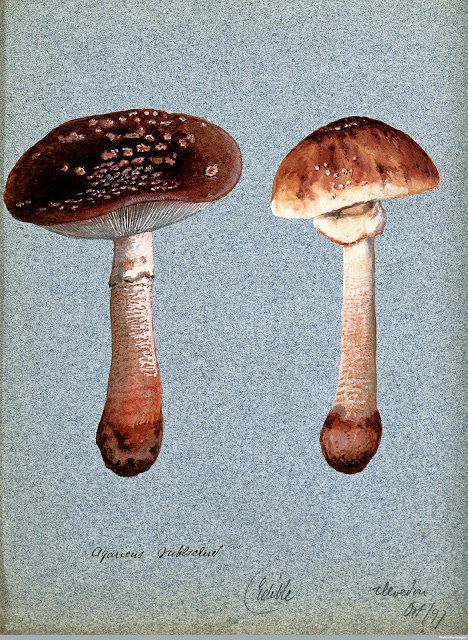 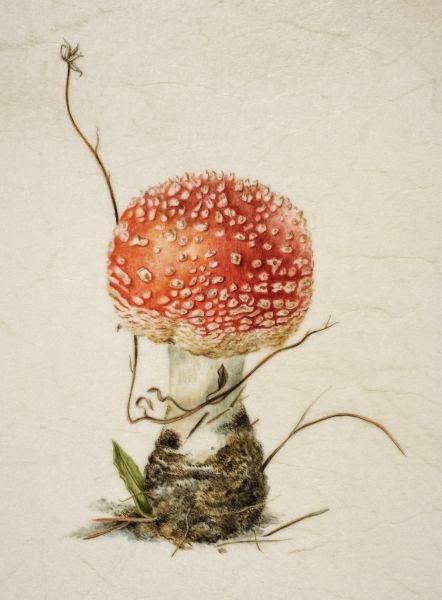 Left: Wellcome Library, London. The blusher fungus (Amanita rubescens): two fruiting bodies. Watercolour, 1897. Right: Amanita muscaria by Anita Walsmit Sachs, 2004, The Society of Botanical Artists.
Harrison's son argues that his father was an expert in mycology, albeit an amateur, who had studied and wrote about mushrooms for years. Harrison produced detailed watercolors of his subjects and believed that England could be healthily fed by fungi and other wild edibles.  As the case documents reveal, it wasn't the un-English practice of mushroom hunting that was to blame; the human heart can indeed be much more sinister.

Mushrooms on Toast and The Lord Peter Wimsey Cookbook 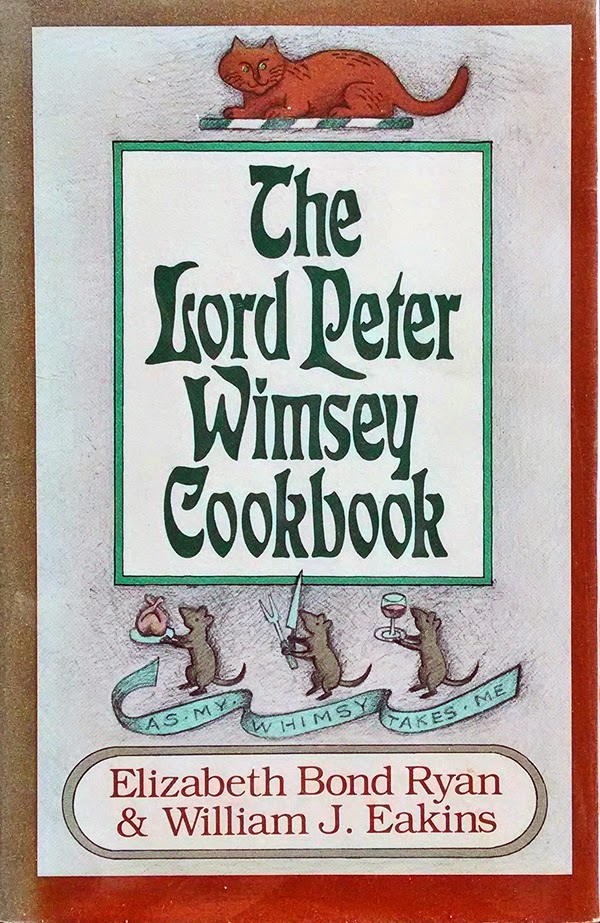 One might recreate the mushroom stew in question from The Documents or try a quotation menu featuring mushrooms that has already been designed for another Sayers novel.  The Lord Peter Wimsey Cookbook (1981) by Elizabeth Bond Ryan and William Eakins, features menus and recipes gleaned from references to the diet and dining practices of Lord Peter in the Wimsey books.  For as the cookbook's authors argue, Sayers was an epicure who revealed her taste in fine food and wine through the Lord Peter character.  Wimsey devotees will recall Miss Climpson's 21-hour tea break in pursuit of a key witness in Strong Poison, depicted in Chapter 4, "An Orgy of Teas;" Lord Peter's unsatisfactory meal at The Soviet Club in Clouds of Witness (1926), appealingly renimagined here with Soviet Club Fish Soup, Red Army Borscht, and People's Black Bread; and my favorite, the meal of Poached Turbot and a Sweet Omelet cooked at table that plays a critical role in Strong Poison (1930).  Published in the same year as The Documents, Strong Poison takes equal delight in poring over a deadly supper.

Sayers makes a brief reference to mushroom foraging in Busman's Honeymoon (1937), in which Lord Peter and his wife Harriet solve a murder while on honeymoon in the countryside. When Lord Peter's efficient and faithful butler, Bunter, has to rustle up a dinner during the trip with few ingredients to choose from, he settles on mushrooms on toast for the final course.  When Lord Peter asks where he obtained the mushrooms Bunter replies,


"From the field behind the cottage, my lord."

"From the--? Good God. I hope they are mushrooms-- we don't want a poison-mystery as well."

"No poison, my lord, no. I consumed a quantity myself to make sure."

With Sayers' signature wit, The Documents' death-by-mushrooms misadventure becomes an insignificant side note in Busman's Honeymoon.  If Harrison had had a Bunter, she seems to quip, he may never have died.

Trim the bases of the mushroom stems.  Leave the mushrooms whole if small and slice or quarter them if large.  Heat one-half the butter and oil in a 10-inch skillet until the butter foam begins to subside.  Then add one-half of the mushrooms.  Toss and shake the pan uncovered over high heat for 4 to 5 minutes.  The mushrooms are done when they have browned lightly.  Remove from the heat and season to taste with salt and pepper.  Turn the mushrooms into a warm dish and repeat the process with the remaining mushrooms, butter, and oil.  Serve the mushrooms on trimmed squares of buttered toast.  The mushrooms may be cooked ahead of time and reheated briefly before serving.

Read Quotation Menus, Parts I & III, then dream up some of your favorite fictional feasts.
Posted by the five o'clock teaspoon :: fiveoclockteaspoon.com at April 25, 2014