Culinary Ephemera: New York's One and Only President

From the humble Automat to the grand Delmonico's, many well-known New York restaurants and eateries have been remembered by history.  But there are still more stories to tell of others that have surpassed the brevity of the average New York restaurant's lifespan.  The President was one such place, lasting for over 40 years at the same location in midtown Manhattan.

In 1930 Charles Munves and Samuel Agran opened The President in a brand new building at 370 Lexington Avenue at 41st St.  A year later they leased the space and basement next door as well.  The picture below shows the two storefronts as they are today, occupied by a Cafe Metro and a Dunkin Donuts.  The President Tavern was located where Dunkin Donuts is now and the Cafeteria was on the corner, the two units divided by the building's front entrance.  The spaces were remodeled several times and at some point in the 1950s the name was changed from The President Tavern and Cafeteria to The President Restaurant (keeping the two distinct dining areas), as it remained until it finally closed in 1972.


Charles Munves was born in 1895 in Minsk, then part of Russia, and later emigrated to New York City.  Agran, previously affiliated with New York's Monroe Cafeteria, was also a Russian émigré, born in 1897, and joined the United States Merchant Marines after coming to the United States.  Munves was thus 35 and Agran 33 when the two jointly opened the restaurant.  They both remained active in the business, even after their sons, Gene Munves and Michael Agran, joined the enterprise in the 1950s.  After the elder Munves and Agran retired, Gene and Michael remained as joint proprietors until the establishment closed, ending a remarkable 42 year run.  The President's early years were at a time of economic instability-- the Great Depression had recently blighted the United States, and in New York, frequent restaurant workers' uprisings culminated with infamous corruption scandals between local gangsters and the leaders of the restaurant workers' union.

Some of the most enduring restaurants profit from cultivating a loyal clientele, coalesced from within a city's tacit divisions of race, class, and gender.  The President Cafeteria/Restaurant served a niche lunch group of white middle-class professional men working in the midtown area near Grand Central Station, much like Schrafft's and Longchamps catered to white middle-class "ladies-who-lunch."  Serving breakfast, lunch, and dinner and open until 1a.m., the cafeteria advertised self-service hot meals "at reasonable prices" in a relaxed, casual environment.  The self-proclaimed largest restaurant in the Grand Central Zone, The President was a reliable staple of the Murray Hill neighborhood and was a regular haunt of soon to be luminaries such as the writer Charles Reznikoff, the cartoonist Harry Hershfield, and the aspiring actress Susan Hayward.  The Tavern section, decorated with wood paneling, mirrors, and white tablecloths, had a cocktail lounge and dining room with waiter service and was the more refined option, advertising "The finest wines and liquor" and "Where eating is a pleasure."  With its comfortable atmosphere and private dining facility, it was a popular meeting place for clubs, fraternities, and societies.  By offering two levels of dining in one trusted establishment, the President was able to appeal to a broader cross section of the public.

The President had a relationship with the neighborhood it served.  As Linda Agran, widow of the late Michael Agran recalls, "During the 1965 blackout the restaurant remained open and served, free of charge, all food that did not require cooking.  When the food ran out they remained open so that stranded commuters had a place to wait until the power returned.  Michael and Gene used candles (donated by the local churches), cooking oil, just about anything that would create some light.  When Michael returned to our home in Rye Brook late the following morning he was covered with soot from the cooking oil lights but so happy that they had helped so many people get through that confusing night."


My grandfather ate lunch at the President Restaurant nearly every day for the over 20 years he worked for an engineering company, at first when the firm was located in the same building as The President and then after his office moved to a building on Park Avenue.  He would lunch in the cafeteria-style restaurant, taking his tray past the assortment of hot food dishes behind a glass case.  Reflecting the standard American diet of the 1950s and 60s the offerings consisted mostly of meat dishes (see menu below).  A typical meal included a seafood or meat dish such as roast beef served with gravy, a side of potatoes, and cooked vegetables such as spinach or a salad.  My grandfather liked to get a few slices of roast beef and chat with the meat carver; he preferred the cafeteria because he liked being able to see and pick out the food he was about to eat.  He would entertain clients in the tavern section.  For patrons like my grandfather, The President offered a one stop dining experience. 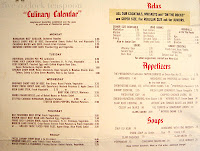 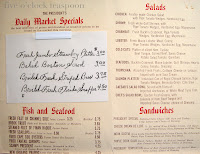 
And of course, The President also had a theme, although it was not a "theme restaurant" per se; the staff did not dress in period costume and sing patriotic ballads or anything like that.  I don't know why Munves and Agran chose to glorify U.S. presidential personages on the menu.  Perhaps they liked the memorable and dignified sounding name and the idea that patrons might feel special dining there.  Perhaps, as recent Eastern European immigrants, Munves and Agran felt it was a kind of homage or good luck symbol for their new business venture in America.  Perhaps they were trying to project a patriotic, Americentric air in an effort to assimilate and seduce a variety of customers.  There is very little recorded information about the men who built this unassuming restaurant with a big name.  After opening The President, Munves married and settled down in Babylon, Long Island.  Sadly, in 1951 the Munves' first-born son, age 5, drowned in a boating accident near their home.  Eventually Munves remarried and had more children.  Certainly The President kept going.

The circa 1961 president-themed postcard below came from the President Restaurant and was designed by Hilborn Novelty Advertising, a company specializing in caricature postcards.  When I see this postcard, with its tiny presidents' head shots pasted onto the bodies of football players proclaiming "An All-American Team with Democracy their Goal," and the menu above decorated with presidents' faces, one empty box eagerly waiting to be filled, I sense the pride and great pleasure that the Munves and Agrans derived from the distinctive place they had built together.  When Michael and Gene decided to close the restaurant in 1972, ultimately pursuing other careers and focusing more on their growing families, Samuel Agran was 75 years old.  He died 9 years later. 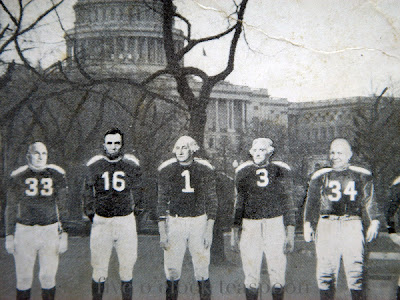 As it happens, I've been enjoying The Bitter Season (1946) by Robert M. Coates, an articulate and sensitively written novel of a writer living in New York during World War II.  The book is filled with descriptions of the city at night, as the narrator takes the reader on a veritable street tour, glimpsing into darkened shops and the windows of eateries open past midnight, where estranged, lonely characters while away their time.  And here, amidst one street scene, is The President:

"Get ya late," cry the newsstand men up around Grand Central (it is dark, it is late, it is cold), and in the bar of the President Tavern two soldiers are standing laughing while a third holds the rim of the bar with both hands and (he laughing too) leans back drunkenly; in the window of Florists Funeral Designs next door they are featuring a set of big brandy snifter glasses, arranged carefully in a row and each one with a small cactus plant growing inside it: apparently it's the latest idea.  (pg. 50)

This description would be from around the same period as the NYPL menu above, dated 1944.

This post was updated on June 21, 2013 with information provided by members of the Munves and Agran families.  My sincere thanks to everyone who kindly contributed details, particularly Linda Agran, whose memories have allowed for a much richer picture of this storied place.

For more on restaurant history, take a look at Jan Whitaker's authoritative blog Restaurant-ing Through History.
Ephemeral New York is an excellent blog on things New York.
Posted by the five o'clock teaspoon :: fiveoclockteaspoon.com at February 28, 2012

This is just the kind of thoughtful reminiscence I enjoy
reading about New York's many lost gathering places.
One always wonders what became of these, and what their histories were. Really a lovely description.

Samuel Agran, my father-in-law, was a wonderful man who loved the restaurant business. In turn, my husband Michael continued with The President Restaurant and Cafeteria after Sam retired. Both men are deceased but I know they would have been delighted with this wonderful piece. Thank you for allowing my grandchildren a glimpse into an important part of their family history

Linda,
Many thanks for your comment. The President was indeed a memorable New York fixture and should not be forgotten. I'm so glad you found the post. If you'd like to share any memories of the restaurant, please do!
5oclockteaspoon[at]gmail[dot]com.

Thanks so much for this post. I remember the President well from my childhood. It was a favorite of my mother's parents.

Charles Munves was my grandfather. His son, and Mike Munves older brother, Eugene was my father. Eugene passed away recently. My father and Mike Agran ran the restaurant from shortly after the war until 1972 when it closed. The neighborhood was undergoing construction and business fell off.

My brother Jon and ate many a wonderful meal there.

Thanks for your comment, Russell. It is wonderful to hear more details from the Munves and Agran families. I'll be updating the post and hope to present a more complete picture with the additional information I've recently received. If you'd like to share any more memories of the restaurant, please do!
5oclockteaspoon[at]gmail[dot]com