The Taste of Snow: Some Historical Uses of Snow in Food & Drink

Snow is a mutable substance, its icy particles giving way to a watery essence when heated. Perhaps it is this transformative process that imparts the subtle but defining characteristics that make melted snow very different from plain water. For centuries, snow has been used not only to keep food and drink cold, but as an ingredient. Snow was considered a superior source of water for brewing tea in premodern China, because of its pure, unadulterated nature and slight effervescence. Snow was collected from plum branches or rocks, before it could get sullied and either used immediately or kept in cold storage. Several literary examples from the Ming (1368-1644) and Qing (1644-1911) eras illustrate the use of snow as a refined gesture when serving tea for a special occasion. A poem by the Qing poet Mao Ti (a member of the illustrious women's literary circle known as the Banana Garden Poetry Club) alludes to the practice:

In the mountains, hungry crows clamor on a thousand trees,
I myself brush the icy flakes together, I myself brew the tea.
I don't care that the freezing cold causes me to shiver all over:
I worry only that the snow may crush the old plum blossoms.

In the Qing novel, The Story of the Stone, by Cao Xueqin, the practice is portrayed more comically. In the following scene, Baoyu, the eldest son of the prominent Jia family, and his cousin Daiyu are drinking tea prepared by Adamantina, a nun at a Buddhist sanctuary:

‘Is this tea made with last year’s rain water too?’ Daiyu asked her [Adamantina].
Adamantina looked scornful. ‘Oh! Can you really not tell the difference? I am quite disappointed in you. This is melted snow that I collected from the branches of winter flowering plum trees five years ago, when I was living at the Coiled Incense temple on Mount Xuanmu. I managed to fill the whole of that demon-green glaze water jar with it. For years I couldn’t bring myself to start it; then this summer I opened it for the first time. Today is only the second time I have ever used any. I am most surprised that you cannot tell the difference. When did stored rainwater have such a buoyant lightness? How could one possibly use it for a tea like this?"
Cao Xueqin, The Story of the Stone, vols. II, trans. David Hawkes, (New York: Penguin, 1973), 315.

I was curious to find out how snow-brewed tea tasted and so I recently made two pots of the same oolong tea- one pot was brewed with water and the other with melted snow of equal temperature. The snow tea made my tongue tingle and the difference in taste was considerable, with an added depth of flavor and roundness to the snow-brewed tea.

Mrs C.F. Leyel's Puddings (c. 1920) includes an interesting recipe for snow pancakes, which calls for a tablespoon of snow to be pressed into each pancake as it cooks on the griddle. 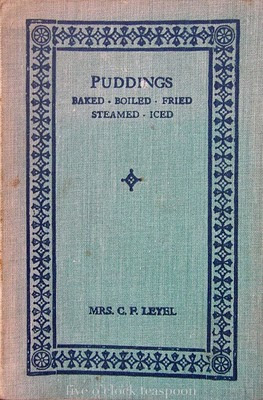 Leyel does not explain the purpose of adding snow to the pancakes, but a little research revealed that this was a common practice in both Britain and America up until WWII. Cookbooks such as Buckeye Cookery & Practical Housekeeping (1877), The Woman Suffrage Cook Book (c. 1886), Miss Parloa's New Cook Book (c.1880) invariably include a recipe using "new-fallen snow" in either pancakes or puddings. An explanation appears in a recipe for Plum Pudding in Jennie June's American Cookery Book (1870) by Jane Cunningham Croly. Croly states: "two table-spoonfuls of snow are equal to an egg in any pudding." (161). This was valuable knowledge for the average housekeeper. Croly later elaborates rather eloquently:

In making pancakes or puddings, snow is an excellent substitute for eggs; two table-spoonfuls of snow stirred in quickly are equal to an egg in puddings or pancakes for making them light. It is explained by the fact that snow contains in its flakes much atmospheric air, which is set free as it melts. (280)

While I didn't find snow pancakes to be as tasty as those made with eggs, they are worth trying. Leyel's recipe is below:

Mix the flour, lemon rind and salt together, and make into a thick batter with the milk.
Put a piece of butter in an omelette pan, and when it frizzles, beat up very quickly a tablespoonful of snow with each pancake and fry until lightly browned on both sides.
Fold the pancakes, dredge them with sugar, and serve piled up.

For more on cooking with snow, see this post on snow bread from The Old Foodie.
Posted by the five o'clock teaspoon :: fiveoclockteaspoon.com at January 22, 2010

What an interesting read, never would have thought of the snow connection. Loved it!

You write such an interesting blog. I'm enjoying all
of the posts which are also visually stunning!
Can you tell me something about the silver spoon which holds a bit of snow in the photograph?

Irisine,
I'm so glad you enjoy this blog. The spoon shown is a soup spoon from England in sterling silver, ca.1900. It's part of a larger service set (although I only have a few pieces). The pattern is typical for turn of the century silver which often features a Renaissance Revival design. Although it is hallmarked, I haven't looked up the maker's mark yet... I'll try to do that soon!