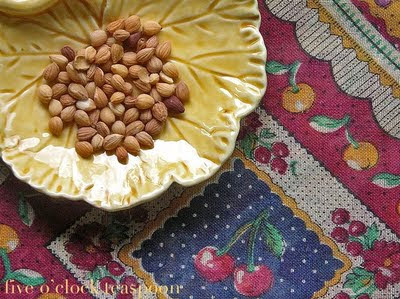 The small, shrubby Prunus mahaleb is one of two species of cherry (the other is Mazzard) from which cultivated cherries are grafted. Also known as the St. Lucie cherry or rock cherry, the name mahaleb comes from the Arabic word that references its sweet smell. While Mahaleb cherries are not usually cultivated for their small and bitter fruit, the seed kernel can be ground into a fragrant spice, known as mahlab, that seems to carry the fruit's seminal cherry essence. 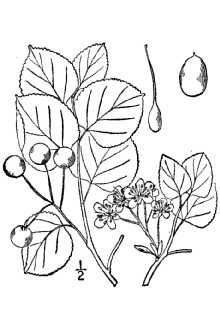 Drawing of Mahaleb leaves, flowers, and fruit courtesy USDA-NRCS PLANTS Database / Britton, N.L., and A. Brown. 1913. An illustrated flora of the northern United States, Canada and the British Possessions. Vol. 2: 328.

With its enchanting almond-anise-like fragrance, complex nutty flavor and surprisingly bitter aftertaste, mahlab is used to flavor baked goods in many European, Western and Central Asian cooking traditions. I have not found explicit mention of mahlab being used in savory dishes. A recipe for Vegetable Stew from a 15th century Dutch cookbook which translator Christianne Muusers calls Wel ende edelike spijse (Good and Noble Food), mentions the ingredient "kernellen van criekelsteenen" or "kernels of cherry stones" in addition to other spices such as anise. The Dutch criekel translates as "black cherry" but I would not be surprised if at the time the cookbook was written, this referred to the black cherries of Prunus mahaleb and not the Prunus serotina variety commonly known today as black cherry. I'm not sure if the latter can be used in seasoning; I have tried breaking open the pit and the kernel looks similar to mahlab, but I have never heard of the pits of any other cherry variety being used in place of mahlab. Any further information would be appreciated. 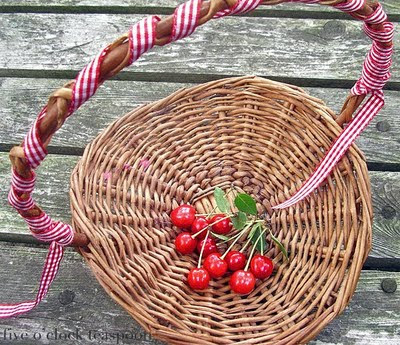 I like to grind a tablespoon or so of mahlab in a mortar and pestle and add it to cookies and breads. I recently experimented with using it in baklava, mixing it into a paste with sesame seeds and cashews. It adds such a lovely fragrance. 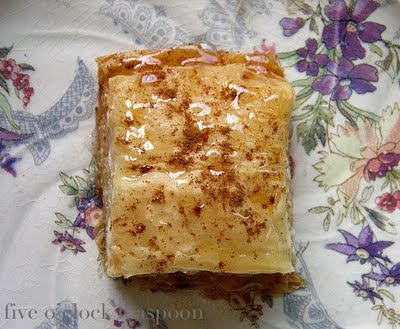 Recipe: Baklava
This recipe requires about 30 sheets of phyllo. I used 4-inch (10cm) wide strips but if your sheets are wider, simply double or triple the first 5 ingredients.
Serves 4

1. Preheat oven to 350ºF. To make the filling, finely grind the first 4 ingredients together in a food processor into a loose, crumbly mixture and set aside. Brush a rectangular baking pan with butter. Place 2 phyllo sheets on pan, brush with butter and repeat this step 4 more times ending with butter on top of the last layer. Evenly sprinkle 1/3 of the filling on top.

2. Place 2 sheets over filling, brush with butter and repeat 2 more times. Sprinkle 1/3 of filling on top. 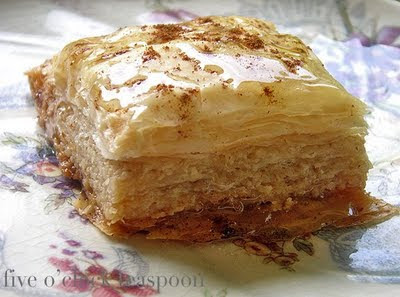 Posted by the five o'clock teaspoon :: fiveoclockteaspoon.com at August 12, 2009

I believe I stumbled across your site via rasa malaysia and have really enjoyed it. Thanks for the great posts.

Dear Klara,
Your baklava is so much different than the Turkish baklava. But it seems interesting! Mahlep -as we call in Turkey- is used a lot in baking. There are many cookie recipes that requires the use of mahlep. But there is a mahlep vermout which is so wonderful. If you ever come to Turkey, you should try it. (Only one company produces it, a Tokat based wine company called Diren. Tokat is a city where mahlep trees are grown.)

Tijen,
Thank you for your comments and further insight into some uses of mahlep in Turkey. The wine sounds lovely.
If you try the baklava recipe let me know what you think. Can you recommend any particular Turkish cookie recipes using this spice?

Wow.. I didn't know there were so many variations to this recipe. I'm intrigued! And the wine pairing sounds divine.. I haven't been able to try a baklava recipe yet, but I'm hoping to soon!