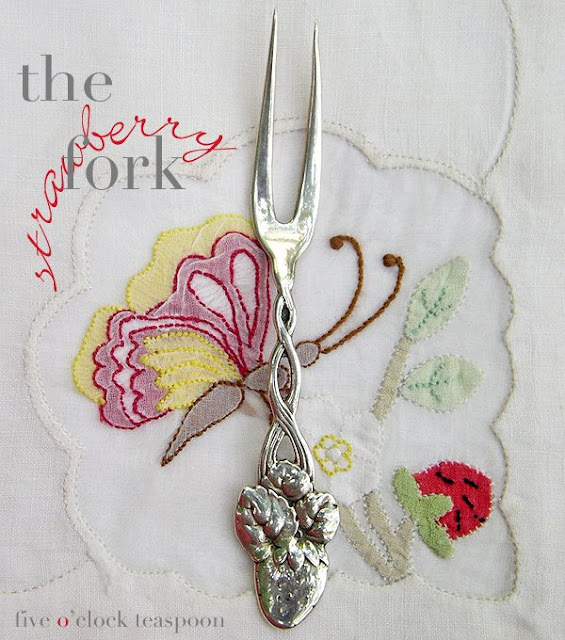 The strawberry fork is a small utensil with 2 or 3 tines used solely for eating strawberries. It is a food-specific, decorative object and like the five o'clock teaspoon, was never a necessity at the table. Yet for a short time in America, items such as these came to suggest refinement and serve as a reflection of wealth and social status.

Post Civil War Society: Activating a Consumer Class
With the industrialization and economic development of America in the second half of the 19th century, a large middle class developed that had disposable income and leisure time. This social mobility led to a growth in conspicuous consumption, as items were marketed toward an increasingly powerful middle class eager to effect the trappings of wealth. Household items such as fine silver were once only associated with elite society. As class boundaries began to blur, dining became more ritualized and defined by rules of etiquette. The resulting tension between social groups often revealed itself through the objects displayed on the dining table. Although silver prices had dropped by the 1850s, the cost of food was still very high and lavish dinner services, complete with specialized cutlery, thereby signified wealth. 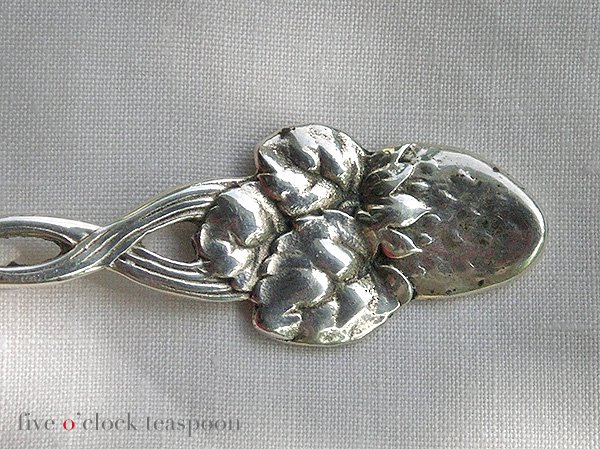 Silver and Conspicuous Consumption in Late 19th Century America
The significance and value of silver changed throughout the 19th century. In the 17th & 18th centuries, silver was accessible only to the wealthy. By the second half of the 19th century, however, American currency had shifted from the use of silver coins to bank notes. As a result, a family's silver no longer served as a representation of their monetary worth. Furthermore, with industrialization, machines were able to efficiently reproduce the time consuming work of the silversmith, making silver more affordable and plentiful. After the invention of electroplating, perfected by the English company Elkington around 1840, this method spread to America and provided a cheaper substitute to the more costly sterling silver standard.

As silver prices fell, several companies such as Tiffany and Gorham began producing silver with a new emphasis on: 1) the object and it's function, and 2) a return to craftsmanship. Following this trend, specialized silver pieces were patented for the rarefied uses of the elite: orange bowls for serving this still exotic, imported fruit; olive bowls, designed and decorated to cleverly suggest the food they held; and utensils as various as ice cream servers, berry scoops, griddle cake servers, melon knives, cherry forks, and strawberry forks, many of which can be viewed on the Cooper-Hewitt Museum's website.

The Decline in Fancy Flatware
Food and object came to define one another and uniquely expressed social conventions and consumer culture at the end of the 19th century. By the 20th century, the fashion for silver had diminished. Yet, it still connoted an elite refinement among the middle class, affirmed by the tradition of wedding silver. Many young women added to their silver collection over the years, and in this way, silver continued to represent a milestone of social achievement. As Jennifer F. Goldsborough says in "From 'Fiddle' to Fatuous: The Proliferation of Cutlery and Flatware Designs in Nineteenth Century America,"

During the years between the end of World War I and the 1970s, when stainless steel supplanted
silver as the dominant flatware material, many young "working girls" spent money to acquire one
silver spoon or fork at a time rather than going to the movies or indulging in a new blouse. As such,
a silver spoon remained, until well after World War II, the most ubiquitous symbol of the American dream.
(Feeding Desire: Design and the Tools of the Table, 1500-2005, New York: Assouline, 2006: 189).

Indeed this idea is confirmed in Mary Davis Gillies' Popular Home Decoration, a guide to the essentials of interior decorating and entertaining published in 1940 and 1948 by Wise & Co., New York. Gillies, also the Interior and Architectural editor for McCall's Magazine, writes, "It is difficult not to take silver seriously. In some incalculable way, it has become all tangled up with sentiment, tradition, and other intangibles" (265). Gillies encourages women to buy silver plate settings or, "if you are of the orchid wearing class and can get sterling for your table, it is practical to use the place setting plan." She singles out a dinner knife, dinner fork, salad fork, butter knife, teaspoon, and dessert spoon for each setting. She then advises that "it may... be necessary to plan your menus around your silver. You will have to forego oysters, for instance, until you get oyster forks." Yet while oyster forks, correlating with a luxury food, remained in use, items like the strawberry fork were no longer relevant. As Gillies advised her readers, "In my estimation you can get along forever without such pieces as: orange spoons, ice cream forks, berry spoons" (266). It is likely that Gillies would have felt this way about strawberry forks, which quickly found their place among the other articles of 19th century frippery. 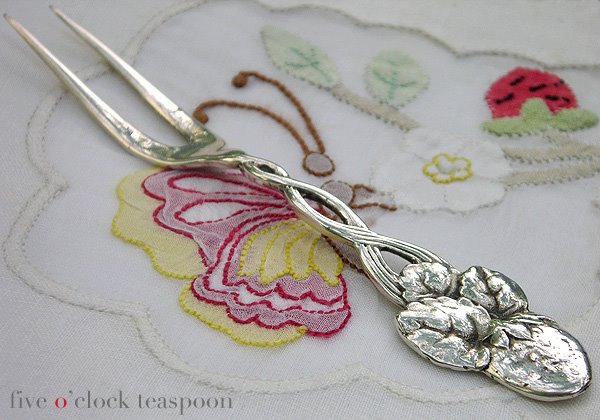 For pictures and information on strawberry forks and similar specialty flatware, see: Osterberg, Richard F. and Betty Smith, Silver Flatware Dictionary. New York: A.S. Barnes, 1981.
According to the authors, the strawberry fork was for "piercing a berry and dipping it into an accompanying dish of sugar, whipped cream, or sour cream" (114).


A Strawberry Recipe from the West Coast Cookbook 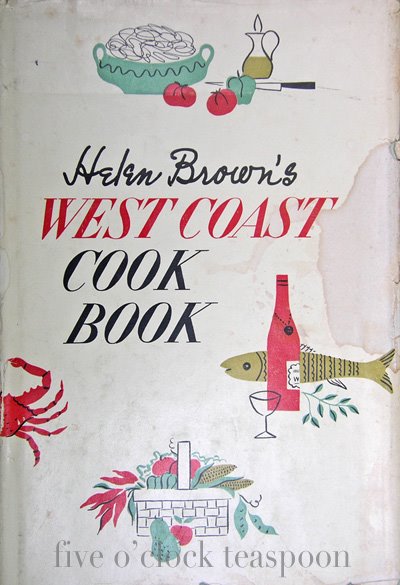 In looking for a dish to feature the flavor of just picked strawberries, I found a nice recipe in Helen Brown's West Coast Cookbook (Boston: Little, Brown & Co., 1952), which involves briefly shallow frying strawberries rolled in crackers (I used Walker oatcakes), ground almonds, and dipped in an egg batter. The fritters were delicious but I wanted something a bit lighter, fluffier, and golden hued. I replaced the cracker meal with fine semolina flour and added a little maple syrup. The recipe below can be adjusted to your favorite ingredients. 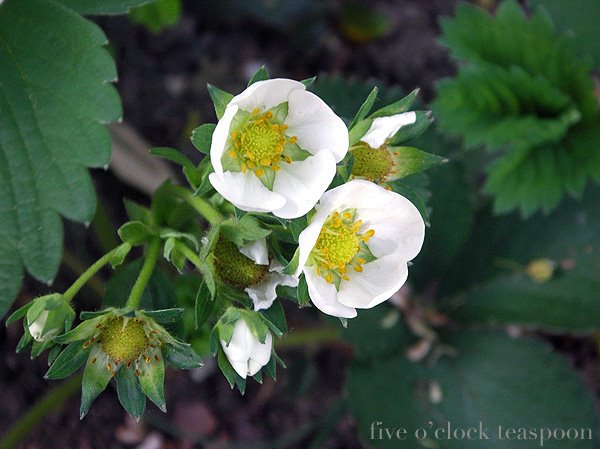 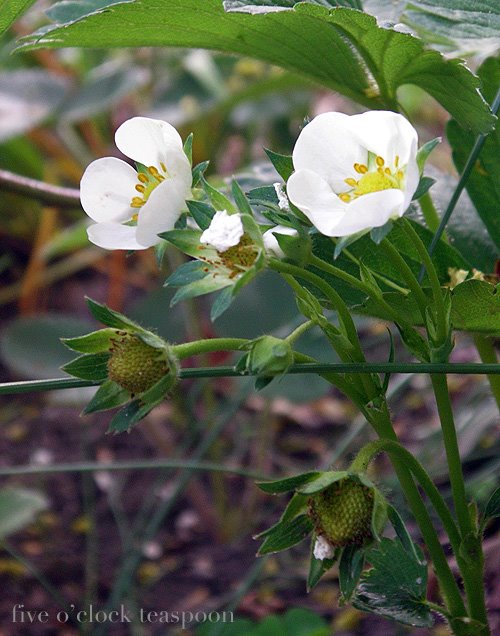 Strawberry flowers in late May 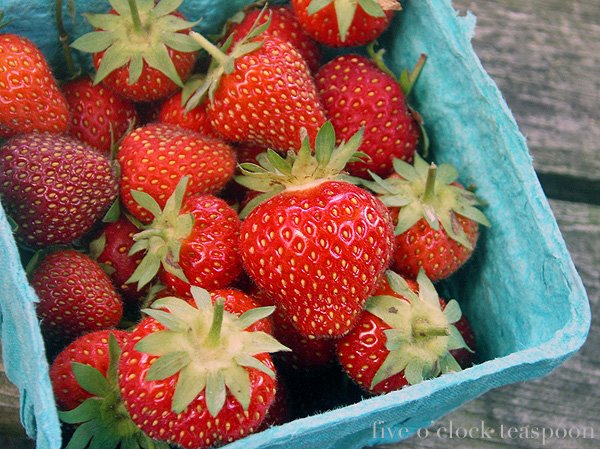 While oil heats in a pan, mix the ingredients in a bowl. For each fritter, place a dollop of batter in the pan and cook, turning once, until golden on each side. Place finished fritters on a plate lined with paper towels and cover until ready to serve. 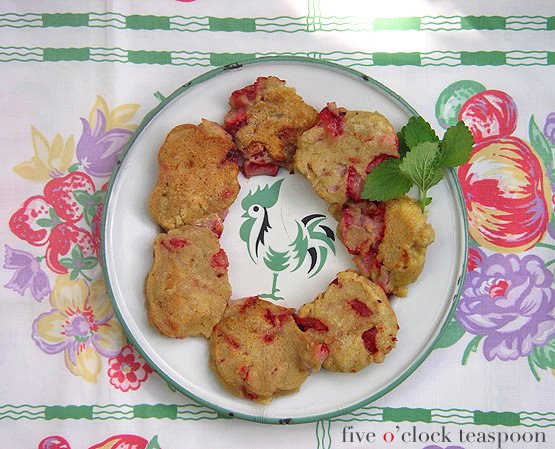 Posted by the five o'clock teaspoon :: fiveoclockteaspoon.com at July 01, 2009

What an enlightening and entertaining post! Not only are your pictures beautiful, but your research and writing is engaging. Will you be writing future posts about other 19th c. cutlery, e.g. melon spoons?

As I collector of 19th century American sterling and plate, I throughly enjoyed your blog entry on the strawberry fork. Alas, I do not yet have any strawberry forks in my collection, but I love arcane utensils and readily use them to entertain. I look forward to reading your blog in the future and will put you on my blogroll. I also blog about silver and collecting among other things.

I posted some photos of a nice little Victorian fork collection I just got, including a pair of this marvelous Tiffany strawberry spoons. I found your site while searching for info -- what a prize! Love your site and thank you for all the info on strawberry spoons.

It appears that I am only three years late to the party-- but what a wonderful post! I love collecting silver and am in love with a strawberry fork. Alas, it will be something that I add to my collection- in lieu of the movies or a new blouse. ;)

"By the 20th century, the fashion for silver had diminished." Fortunately, not true.

I am pleased to say, apropos of your delightful blog, that silver is alive and well in the circles in which I move. In fact, people I know with the funky, food-specific utensils make a point of serving those foods to show the stuff off.