Rosewater: Essence of the Garden 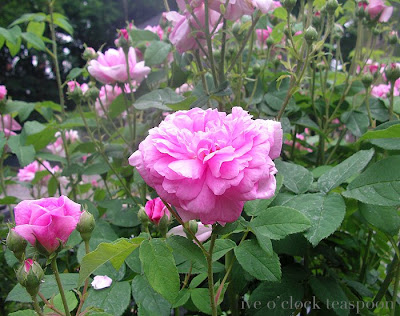 Scent of the Garden: Flavoring Food in Middle Eastern Cuisine

Besides its reputation as a common subject in the visual and literary arts, the rose has occupied a place among culinary traditions in many parts of the world. Rosewater, with its refreshingly uncloying sweet perfume, has been used to add flavor and scent to food and drinks for centuries. In medieval Islamic cuisine, aromatics were artfully used to heighten the sensory pleasures of eating and rosewater is a common ingredient in cookbooks from various regions. These include the 10th century Iraqi Kitab Tabikh by Ibn Sayyar al-Warraq, the ca. 14th century Fadalat al-khiwan fi tayyibat al-ta ‘am wa’l-alwan by Ibn Razin al-Tujibi from Murcia in Spain, and the 13th-14th century Kanz al-fawa’id fi tanwi‘ al-fawa’id, possibly of Egyptian origin (Manuela Marin, "Beyond Taste: the Complements of Color and Smell in the Medieval Arab Culinary Tradition," In A Taste of Thyme: Culinary Cultures of the Middle East, eds. Sami Zubaida & Richard Tapper, 2006). Some Arab cookery books correlate cooking with garden building as both arts involve organizing individual components towards a final aesthetic product that will engage all of the senses.(Ibid., 214). 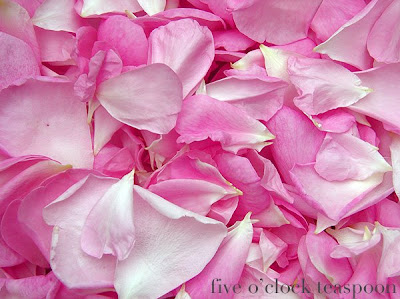 Petals from the Ispahan Rose.

The concept of the ideal Islamic garden, or paradise garden, was beautifully realized at the 17th century Mughal Indian palace retreats in Kashmir. The garden was a special place in the Mughal court, as much a part of the living space as the palace itself. Within the gardens' permanent stone structural foundations, an ephemeral form of beauty was on display, as water, flowers, and decorative objects, along with intangible elements like sound and scent, combined to create the Islamic Paradise on earth. 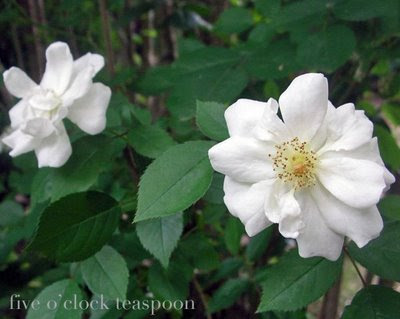 Flowers were a central element in the Mughal paradise gardens of Kashmir. Wide herbaceous borders included flowers with varying bloom times so that the garden would be in color for most of the year. Crocuses, tulips, iris and narcissi blossomed in the spring. Roses bloomed throughout most of the year and their heady fragrance was perfectly suited to a paradise garden. Queen Nur Jahan, wife of Emperor Jahangir, is credited with extracting the rose’s essential oils and making rosewater. As with fruit cultivation, this became an industry in itself and was later exported around the world. Painted porcelain flasks held rosewater and were kept in the garden in wall niches. Along with the flowers and their fragrance came birds, their calls adding to the enchantment of the garden. 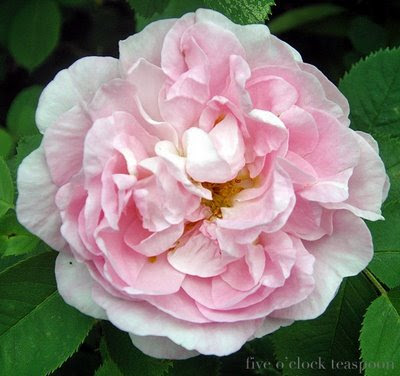 Making Rosewater and Cooking with Rosewater

Preparing rosewater could not be simpler since it involves merely pouring boiling water over fresh petals and steeping them. The quality of the rose matters, however. Choose an heirloom variety that is extremely fragrant. Depending on the variety the perfume may be quite different so pick a scent you really like. Most importantly, the roses must be unsprayed, and ideally located away from a main road from which dust and fumes can settle on flowers. 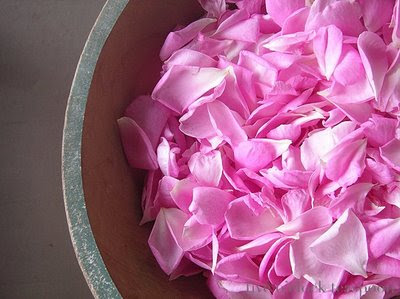 Place rose petals in a large bowl and cover with boiling water. Allow to steep for 15 minutes. Strain the liquid through a fine cheesecloth into a jar or bottle and keep in the refrigerator until ready to use. 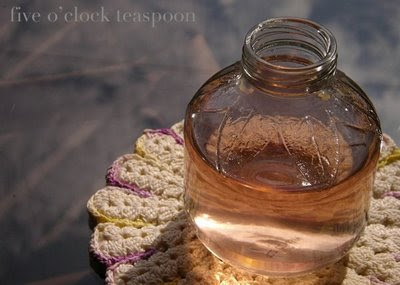 Rosewater will retain a pink hue when made with pink roses of a high color saturation. Otherwise the color may be a pinky-yellow.


Rosewater adds a lovely background perfume to many dishes or a pleasing garnish when splashed on sweets such as the almond chai halva posted previously. I've also made coconut-rose ice cream, a fondue-like rosewater mascarpone sauce to dip cookies in, savory rice and couscous flavored with rosewater, and most recently this delightful rose lassi. Refreshing and nourishing, this beverage is a perfect restorative on a hot day.

Whisk yogurt swiftly until it becomes smooth. Add rosewater and sweetener and whisk until well blended. Taste to adjust flavors. You'll want to be able to taste the rosewater without it being overpowering. Pour into glasses and serve with or without ice. 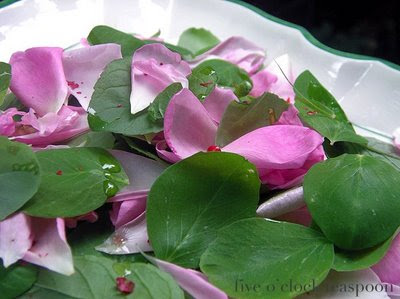 Left over rose petals make a lovely summer salad. Simply add a handful of roses to some other small-leaf greens and top with a light drizzle of olive oil, lemon juice, and some crushed pink peppercorns or freshly ground black pepper.

Halva: A Sweet of Worldly Delight
Cooking with Roses
A Thousand Damask Roses


Selection of References on Islamic Gardens:

Maurières, Arnaud and Éric Ossart. Paradise Gardens. Paris: Hachette Livre, 2000.
Detailed analysis of aesthetics within the Islamic garden, such as particular flowers and their scents.

I am lucky to have a small rose garden in my weekend home and every year make a batch of Rose Petal Jam--delicious on warm bread.
it is a delicious unusual treat

I just came across your blog and have fallen in love with it. Your sense of style is beautifully nuanced. I'm eager to pore over your future posts. Keep up the good work!