Although eggplant (Solanum melongena) also known as brinjal or aubergine, is cultivated around the world, the plant is native to southern India and Sri Lanka. The petite variety, shown below, is often labeled "Indian eggplant" in grocery stores. While "Indian" is indeed redundant, the small, egg-shaped variety is mainly grown in India, where eggplant is called baingan or kathirikkai. 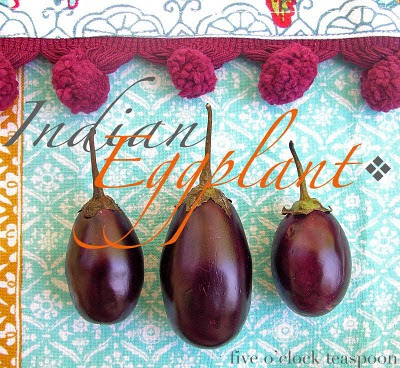 In both early and modern cookbooks, recipes using eggplant usually advise methods to remove the fruit's natural bitterness, or make it less mushy when cooked. Following the recommendation of a friend of mine from the Philippines, I've found the simplest way to cook small eggplants is to first boil them, then squash the softened eggplants with your palm, dip them in beaten eggs and lightly fry them. The fritters are soft with crispy edges, and not at all bitter. You can use any small eggplant variety for this. To make fritters with a large eggplant, thinly slice the raw eggplant lengthwise, dip slices in beaten egg, and shallow fry. 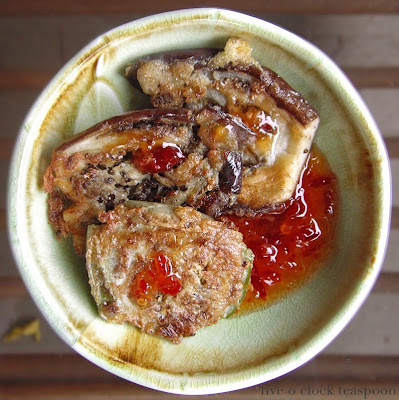 1. Add eggplant to boiling water and cook until the tines of a fork easily pierce the skin. Drain the eggplant and place on a kitchen towel to cool completely.
2. When cool, flatten each eggplant half with the palm of your hand. Heat a large frying pan with 2 Tbs oil.
3. Dip each flattened half in the beaten eggs and place in the hot frying pan. Cook 2-3 minutes on each side, or until golden brown, adding more oil as necessary.
4. Place cooked eggplant on a plate lined with paper towels to drain excess oil. Serve hot or at room temperature with sweet chili sauce.
Posted by the five o'clock teaspoon :: fiveoclockteaspoon.com at June 28, 2010

I love eggplant, and this dish sounds just simple and tasty, and what isn't good about that?

OysterCulture,
Let me know what you think if you try them!