Growing Saffron
Saffron is derived from the autumn blooming Crocus sativa, or saffron crocus. Saffron threads, the bloom's stigmas, are easily extracted, when gently pulled in late autumn, soon after the crocus has bloomed. The harvest process is time-consuming however, and with 75,000 flowers required to produce just 1 pound, saffron is an expensive and precious commodity. Rather than buying saffron for culinary use, it makes sense to grow your own. Saffron bulbs can be planted in the ground or in pots and do not require much growing space. Once planted in the ground, they will continue to bloom year after year. I have about 20 bulbs and am able to extract enough saffron to last me at least a year, about 1 teaspoon.

The food writer, Elizabeth David describes the sight of saffron harvesting in the Spanish countryside:

Her father was preparing saffron-- picking the orange stigmas one by one from the iridescent
mauve flowers heaped up in a shoe box by his side and spreading them carefully on a piece of
brown paper to dry. The heap of discarded crocus petals made a splash of intense and pure
colour, shining like a pool of quicksilver in the cavernous shadows of the village living room.
Every night, during the six-odd weeks that the season lasts, he prepares a boxful of flowers... 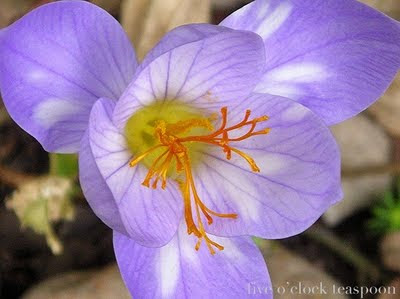 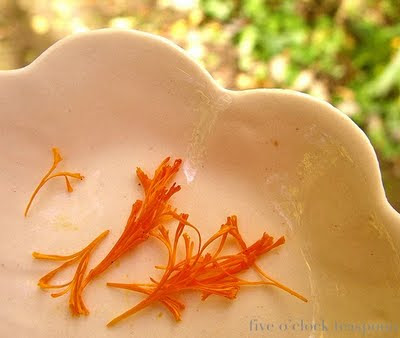 Freshly pulled saffron in early November. Place the fresh stigmas in a single layer on a non-porous surface for several days until dry.

Saffron as an Ingredient
While saffron is often recommended for its flavor in modern cookbooks and recipes, early recipes stress the use of saffron as a colorant. When steeped in liquid, saffron threads tint the liquid with their radiant, sunset hue and can offer vibrant, decorative appeal to a dish. Ancient records describe the use of saffron in medicinal preparations, but by the 14th century saffron appears alongside ingredients such as cinnamon, nutmeg, and rosewater in European and Islamic recipes for sweet and savory dishes including rice, meats, vegetables, puddings, and halva. A common coda to the 13th century recipes of al-Baghdadi in Kitab al-Tabikh translates as "colour with saffron." In many medieval recipes egg yolks are often combined with or used instead of saffron for the same purpose. Examples can be viewed at the online archival resource, Medieval Cookery. 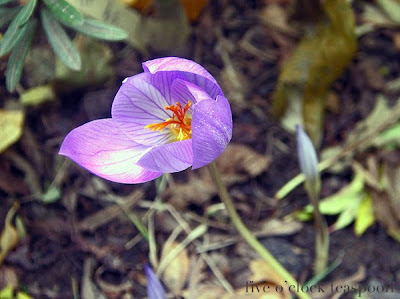 The presence of color at the elite medieval table stemmed from color associations that developed in antiquity. In some cases, however, the decorative aspect may have been enough to establish color conventions for certain foods. Food historian Ken Albala addresses the decline of saffron's status in his book, Eating Right in the Renaissance. Saffron's golden color and dear price became acculturated as a mimetic link to the aristocracy in Medieval Europe. According to Albala, saffron lost this status by the 17th century as the spice, although still costly, became available to lower classes. Albala argues that while trade may have increased accessibility to rare spices, prices remained competitive and governed by Portuguese and Dutch monopolies. This link between access and value is suggested by Polish food scholar Maria Dembinska who notes, "saffron was more expensive in Gdansk than in Cracow or Lvov during the Middle Ages, which suggests that distance from market source played a key role in determining the cost of such imported goods. A large portion of Polish saffron appears to have come from regions bordering the Black Sea where saffron originated, via Genoese middlemen." Although the appearance of saffron in European recipes reflects expansion in trade with Western Asia, saffron cultivation became an industry in parts of Europe. By the 15th century in Britain, a saffron industry had developed in the area eventually known as Saffron-Walden in Essex. The spice came to be a common feature in the dishes of East Anglia and Cornwall. 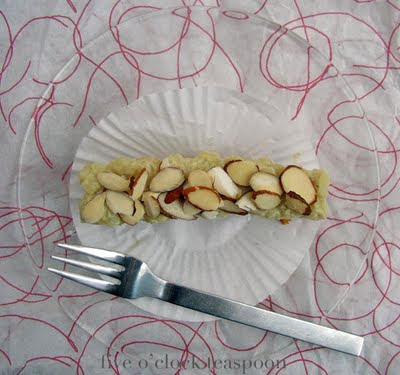 Saffron Rice Pudding Cake
In this creamy, no-bake cake, saffron imparts a delicate golden color to the rice pudding. The almond topping can be made more decorative by soaking the almonds in saffron liquid and then lightly toasting them. The cake can be refrigerated for up to 3 days.

A rectangular or square metal tart pan with a removable base.

1. Bring the soymilk to boil in a large pot and add rice. Reduce to a simmer and stir in sugar, cardamom, vanilla, and cinnamon. Cook, stirring occassionally, until the rice absorbs most of the liquid, and a pudding-like consistency is reached, about 20 minutes. Remove from the heat and cool. Pour the saffron liquid through a strainer into the rice and discard the threads.

2. Meanwhile, place amaranth biscuits in a food processor and grind to a medium-fine, cornmeal-like texture. Add butter or oil and salt and pulse to incorporate fully.

3. To assemble the cake, scoop spoonfuls of ground biscuit mixture evenly onto tart pan and using plastic wrap, press into an even crust. Repeat with the saffron rice pudding. Refrigerate until set, at least 2 hours. To serve, slice into sticks or bars and top with slivered almonds. 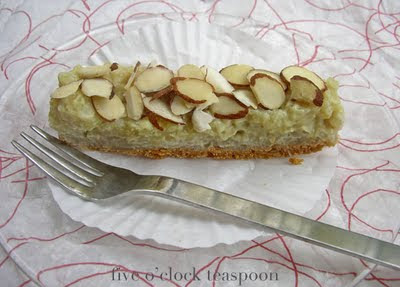 Dembinska, Maria. Food and Drink in Medieval Poland: Rediscovering a Cuisine of the Past. Philadelphia: University of Pennsylvania Press, 1999.

Scully, Terence. The Art of Cookery in the Middle Ages. Suffolk: Boydell Press, 2005.
Posted by the five o'clock teaspoon :: fiveoclockteaspoon.com at December 08, 2009

The pudding cake looks really scrumptious.
I will certainly try making it. There is also a lovely
white autumn saffron variety (saffron sativa 'alba') that one might plant in drifts with the blue for a very
pretty combination under an autumn red-leaved
Japanese maple or a dogwood.

What a lovely autumn image. There are so many saffron crocus varieties to experiment with and are beautifully contrasted when combined with the orange, red, and yellow hues of fall. I will look for the 'alba' variety-Thanks!

wow! the rice pudding cake looks gorgeous. what an interesting post! how late does the saffron crocus continue to bloom? can it withstand frost?

The saffron crocus blooms only for about 2 weeks so they're mostly gone by mid to late November. They might last through a frost but even a light rain leaves them crumpled. It is important to remove the saffron threads before the blooms get rained on.